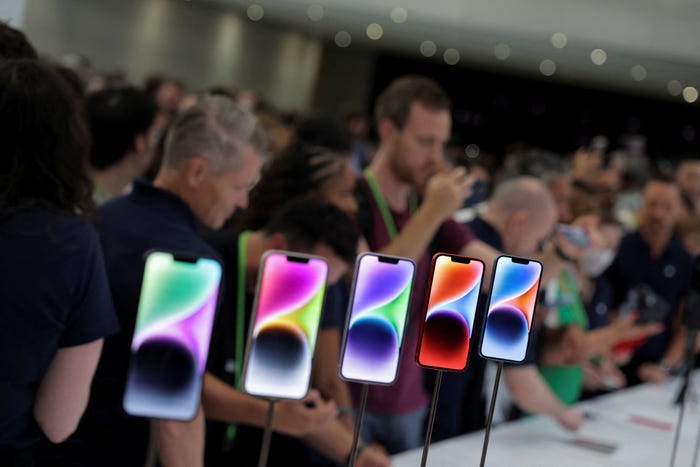 My first phone, like many people born in the '90s, was a so-called Nokia "brick." Since then, I've cycled through various other phone makers — Samsung, Huawei, Motorola — but I've never succumbed to Tim Cook's empire.

Possibly the biggest consideration that people take into account when buying a new phone is the price. And iPhones aren't cheap.

The newest model, the iPhone 14, costs a hefty $799 for the cheapest version. And the Pro version, which comes with other perks like a better camera and the new Dynamic Island feature, starts at $999.

You add $100 if you want to upgrade either model for the Plus or Max version, which has a bigger screen. The most expensive version of the iPhone 14 available for purchase, the Pro Max with a terabyte of storage, comes in at $1,599.

If you want a more basic version with less functionality but a smaller price tag, you're out of luck. Unlike other phone makers, Apple doesn't sell an updated but low-budget version of its phones, and instead redirects customers to its older models.

Samsung, in contrast, sells the Galaxy A53 5G for under $500, alongside much higher-end models like its fold and flip phones.

My current phone — a Samsung Galaxy A52s 5G — isn't perfect, and there are things about it that can frustrate me, but at least I know I haven't spent a lot of money on it.

I have a largely unjustified hatred for AirPods — but Apple doesn't give the buyers of its latest models the option to shun the wireless earbuds.

Instead, since 2016, iPhones have come without a headphone jack, leaving users with limited options if they don't want to blast their music out loud to unwilling passengers on the subway. They can either invest in pricey AirPods or buy a set of headphones with a special adapter that can be inserted into the charging jack – meaning you can't charge your phone and listen to music at the same time, unless you have a wireless charger.

The cheapest AirPods on Apple's site start at $129.

I personally hate the concept of AirPods. True, sometimes headphone wires get caught in your hair or unplug if you forget and stand up to get a coffee, but these are solvable problems. I worry enough about losing jewelry or my scarf when I'm out and about – I don't want to have to worry about an AirPod falling out, too.

Once I saw a person chasing an AirPod down the sidewalk after a gust of wind whipped it out of their ear during a thunderstorm. It was an image I'll never forget.

My current Samsung phone came with a free pair of Galaxy Buds Live, but I haven't used them once. I actually had the option to get a newer version of my current phone for around $30 more, but opted not to because it didn't include a headphone jack.

... and they don't come with a charger

iPhones no longer come with wall chargers, either. Since the model 12, iPhones have simply come with a USB C to Lightning cable, which Apple says allows it to create smaller and thus more sustainable packaging.

You can just plug your phone into your laptop or an adapter you already have to charge it – but if you want an adapter from Apple to plug it into, you have to fork out an extra $19.

Considering it used to be provided for free, the extra charge is annoying for first-time iPhone users who may not have other adapters they can plug their cable into.

The battery life on iPhone isn't that great, either, and Apple has been sued for its past practice of intentionally slowing down old iPhones.

Apple's so-called "batterygate" scandal began in 2017 when Apple admitted it was slowing down customers' devices when they downloaded new versions of its software, saying that it was to prevent their old batteries from randomly shutting the phones off. Some critics, however, questioned if it was a move to prompt people to buy newer, more expensive models.

"We have never — and would never — do anything to intentionally shorten the life of any Apple product, or degrade the user experience to drive customer upgrades," a spokesperson previously told Insider. "Our goal has always been to create products that our customers love, and making iPhones last as long as possible is an important part of that."

In November 2020, Apple agreed to pay $113 million to settle an investigation in the US over the matter and paid $500 million in a class-action lawsuit in March.

There's not much difference between each model

The differences between each iPhone model aren't that big. Even Eve Jobs agrees.

Insider's Sam Tabahriti wrote that he regretted trading in his iPhone 13 Pro Max for an iPhone 14 Pro Max.

"While the newest series of smartphones has several new software features, I'm disappointed that there isn't more to it," he wrote.

"Having had the iPhone 13 Pro Max, I can't see a difference that makes it actually worth upgrading for, apart from Dynamic Island. Maybe the smartphone has simply got as good as it's fundamentally going to get?"

I don't care about iPhones as a status item

iPhones are now the norm: Counterpoint Research says they make up around half of phones bought in the US. Brand-specific terminology around them is even encroaching on our everyday conversation: "AirPods" is sometimes used for non-Apple wireless earbuds; people say "FaceTime" even if they're video-calling using other software; and my roommate even said to me recently, when he went to look something up, "Let me check that on my iPhone."

But I don't care about iPhones as a status item. Like designer clothes and sports cars, which phone model you have doesn't say anything interesting about you as a person.

Once you get an iPhone, you never go back

It's a mantra I've heard many times. And I don't want to be tempted, and then get stuck in that loop.

A lot of iPhone owners tend to gravitate towards other Apple products, too, and end up with a whole suite complete with a Mac, Apple Watch, and Apple TV, too. I'm quite happy as I am.

I'll stick with my Android

Sometimes not having an iPhone can be annoying.

I have never FaceTimed or iMessaged anyone, and there are some apps I get access to late or even not at all on Android. There are also some great features included in the newer models, like the crash-detection software.

But for me, personally, I can make do without one. I'm stubborn in my ways, and an iPhone is a big investment that I personally don't think is worth it.

Source: https://www.businessinsider.com/android-smartphone-iphone-phone-apple-samsung-airpods-status-price-upgrade-2022-11
We use cookies to ensure that we give you the best experience on our website. If you continue to use this site we will assume that you are happy with it. Ok