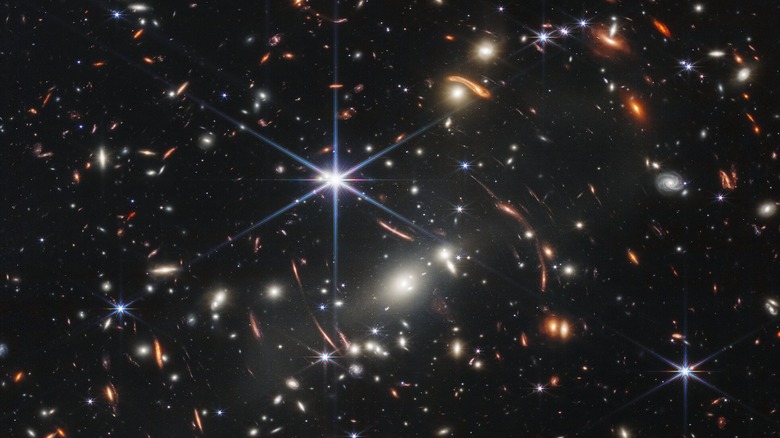 One of the biggest goals for the James Webb Space Telescope (JWST) is to look back on some of the earliest stars in the universe. By identifying these extremely distant stars, researchers can learn about the conditions when the universe was young and about how stars have evolved with their environments. Now, new research reveals that Webb has been used to identify the most distant ever globular clusters, which could contain some of the universe's first stars.

A globular cluster is a densely packed group of tens of thousands or even millions of stars that are held together by gravity (via NASA), and one such cluster has been identified in the first deep field image from Webb.

The globular cluster, detailed in a paper in the Astrophysical Journal, is known as the Sparkler galaxy because it is surrounded by reddish dots which the researchers nicknamed sparkles (via phys.org). From looking at twelve of these sparkles, the researchers found that five of them appear to be extremely old globular clusters.

"JWST was built to find the first stars and the first galaxies and to help us understand the origins of complexity in the universe, such as the chemical elements and the building blocks of life," said one of the researchers, Lamiya Mowla of the University of Toronto. "This discovery in Webb's First Deep Field is already providing a detailed look at the earliest phase of star formation, confirming the incredible power of JWST."

Looking back in time with Webb

The research used both data from Webb's NIRCam instrument and archival data from the Hubble Space Telescope. Combining these two sources lets the researchers see the clusters in a range of different wavelengths to help understand them better.

The reason Webb is able to look back at some of the earliest galaxies is due to its sensitivity. It has highly sensitive instruments, which are helped by the fact it is in space, so it isn't disturbed by water vapor in Earth's atmosphere or the heat from the planet. This lets it view even very faint sources of infrared light.

Looking at very distant objects is like looking back in time because of the speed of light. As it takes time for light to travel to us, the more distant an object is, the earlier the light must have left it. This means that if we use Webb to observe these very faint, very distant galaxies, we are seeing them billions of years ago, as they were when the universe was young.

The globular clusters spotted in the deep field image are among the earliest that ever existed, according to the researchers.

"These newly identified clusters were formed close to the first time it was even possible to form stars," said Mowla. "Because the Sparkler galaxy is much farther away than our own Milky Way, it is easier to determine the ages of its globular clusters. We are observing the Sparkler as it was nine billion years ago, when the universe was only four-and-a-half billion years old, looking at something that happened a long time ago."

Source: https://www.slashgear.com/1031236/webb-telescope-takes-a-peek-at-the-oldest-stars-in-the-universe/
We use cookies to ensure that we give you the best experience on our website. If you continue to use this site we will assume that you are happy with it. Ok