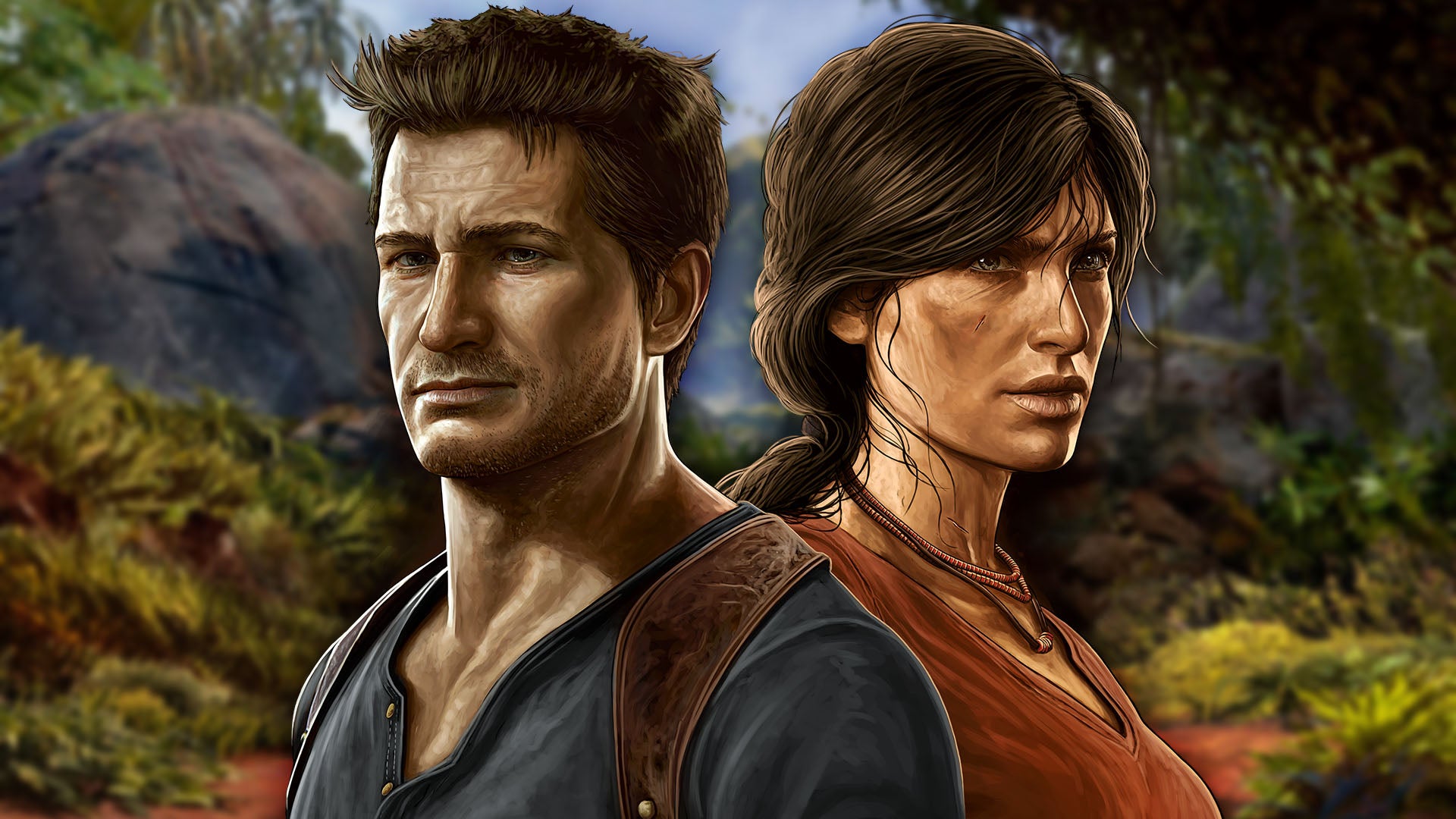 Released earlier in the year, the Uncharted: Legacy of Thieves collection brought the PlayStation 4-era franchise entries to the new PS5, with some mild enhancements to the overall presentation and a major focus on resolutions and performance. 4K at 30fps, 1440p at 60fps and 1080p at 120fps effectively allowed you to balance pixel count and frame-rate whichever way you wanted. These choices are now even wider thanks to a recent 120Hz VRR patch, which delivers some great results.

While the Naughty Dog titles deploy state of the art rendering, thus far the studio has not embraced dynamic resolution rendering to balance performance - not even in its latest title, The Last of Us Part One. So, in theory at least, the PS5's GPU is not fully maxed out. To be clear, the new patch 1.002 does not add this feature, but via VRR upgrades it taps into that latent GPU power by offering the ability to unlock frame-rate, while also adding a 40fps fidelity mode. This works in a similar manner to the option seen in Ratchet and Clank, the Spider-Man titles and Horizon Forbidden west.

The new 40fps option replaces the 30fps fidelity mode when you boot the game with 120Hz output enabled on your PS5. In addition to that is an unlocked version of the same mode, leveraging VRR to deliver a smooth experience with a variable frame-rate. Visually speaking, this is a match for the old fidelity mode - both render at a crisp native 4K resolution, with the same capable treatment of fine detail. Even in the most intense scenes, a straight 3840x2160 pixel count seems to be in play - there's still no DRS, meaning that effectively, we're 'hoping' there's at least 10fps of clearance once the frame-rate cap is increased.

The new Uncharted: Legacy of Thieves patch opens up a wealth of performance options - and Oliver Mackenzie covers them all here.

And at first glance that's a little bit worrying. The Last of Us Part 1, which runs on a newer build of the same graphics engine, has a 40fps Fidelity option that also renders at native 4K, but that mode is frequently dragged down into the 30-40fps range, a victim of the extreme resolution render target. I was concerned that similar results would await us here, but thankfully the results are solid, with a locked 40fps for most of the duration. Massive shootouts, driving sequences, daring escapes - I spent hours stress-testing this mode in the most challenging sections across both games and it holds up very well. 40fps splits the difference between 30fps and 60fps in terms of frame-time (33.3ms at 30fps, 16.7ms at 60fps, 25ms for this new mode) and ends up feeling pretty smooth here.

However, it's not quite perfect. In a few select sequences, I was able to trigger sub-40fps readings. The Madagascar combat and chase section was the most reliable culprit, with the busy market area causing brief dips, and the subsequent multi-vehicle pursuit throwing up less-than-ideal results in a few moments. At worst, we're looking at 35fps or so while fighting off chasing enemies. Explosions and smoke right in front of the player viewport can cause issues elsewhere as well - but for the most part, the drops in the 40fps Fidelity mode are brief, rare, and aren't especially intrusive while playing. There's one exception, however. The Lost Legacy features a rainy fight with an APC a few hours into the game, which was a demanding encounter on PS4 Pro and causes extended framerate issues here as well. It's mildly annoying but it clears up once the enemies are defeated.

There are also a couple of very minor issues worth noting. The Uncharted games hold a frame on each camera cut for TAA purposes, which presents as a subtle stutter when the viewport shifts. Also the brief interstitial videos that sometimes bridge real-time cutscenes and gameplay playback at a straight 30fps. Overall though, the 40fps fidelity mode is almost a strict upgrade over the existing 30fps Fidelity option. Animation is smoother, input response is snappier, and the visuals are identical. A handful of minor frame-rate blemishes do crop up in very demanding moments, but outside of that this is essentially a locked 40fps. 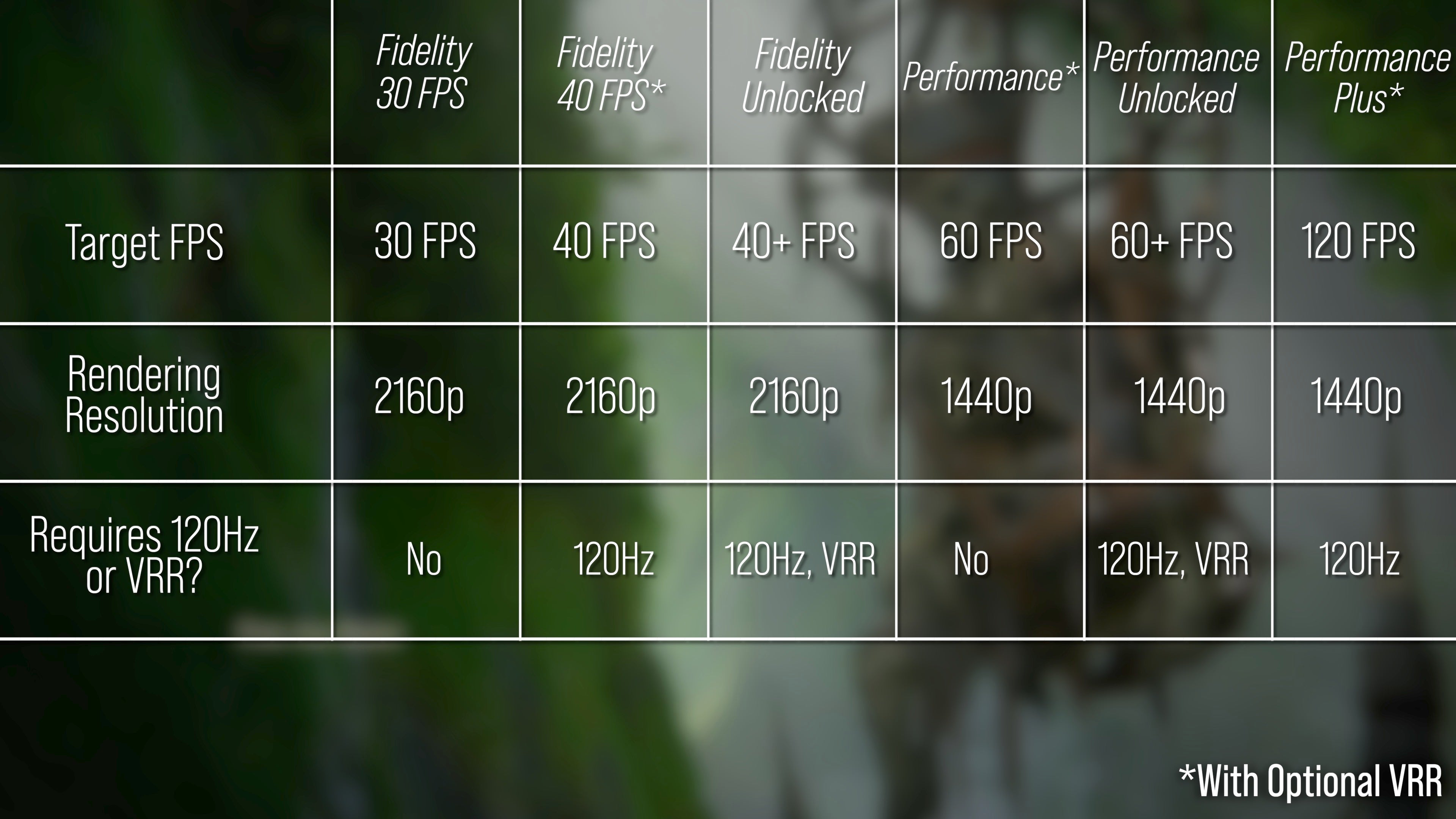 This table shows the vast array of performance permutations now available. Our recommendation? If you have a 120Hz VRR screen, go for performance or fidelity unlocked. Do you have a standard 60Hz screen? Go for the standard performance mode instead.

The unlocked version of fidelity mode delivers 45-50fps with dips at worst to the mid-30s.It does feel significantly smoother than the regular v-synced fidelity mode, and actually seems reasonably close in general fluidity to the v-synced performance mode, at over twice the resolution. And of course, any dips below 40 FPS are perfectly smoothed out and don't really register while playing. The same pattern holds true for the unlocked performance mode - but the performance uplift is much more profound. Under v-sync, the prior performance mode was already essentially a locked 60fps, so here we're always above that threshold.

The Uncharted games generally run at 90-110fps here, which in practice feels silky smooth. Sedate scenes reach a full 120fps, and very demanding sections can briefly dip into the 70s and 60s, but the average frame-rate hovers around 100fps. That's not far from the 120fps refresh offered in the existing 120Hz 1080p-based performance plus mode and it ends up seeming quite similar in general play, but with substantially higher resolution and image quality. Relative to the v-synced performance mode, this is a huge upgrade. In most titles, unlocking the frame-rate doesn't give you this much of a boost - including in The Last of Us Part 1's unlocked frame-rate modes. However, given the conservative fixed resolutions that the Legacy of Thieves Collection is targeting combined with its PS4-era visuals, there's a transformative boost to frame-rate and animation fluidity when you let it run all-out.

That's all of the new modes covered, but there is another way to run the Legacy of Thieves Collection under VRR. Enabling VRR in the PS5's system settings and leaving the unlocked toggle off allows you to play these titles with capped frame-rates, but with VRR enabled to smooth out any frame-rate hitches. The performance mode is essentially identical to its fully v-synced counterpart if you just enable VRR. It didn't have issues before, and it doesn't now - it's more or less a straight 60fps the whole way through. Fidelity mode is mildly more interesting under these parameters - the drops under 40 are smoothed out nicely, though it's otherwise the same as without VRR. In both cases, I would strongly prefer to play these modes with the unlocked toggle enabled instead.

Here's John Linneman's original video coverage of the Legacy of Thieves Collection from earlier in the year.

However performance plus doesn't support the VRR unlocked toggle, as the PS5 doesn't support refresh rates above 120Hz. So simply enabling VRR in the Performance Plus mode makes a bit more sense here. As you might expect, any dips beneath 120fps - most obviously, in the convoy chase sequence and APC fight - are smoothed out by VRR. This is a perfectly sensible option and is definitely preferable to the performance plus mode running under v-sync. However, the performance unlocked mode also offers high frame-rates, often in excess of 100fps, and comes paired with a 1440p resolution instead of 1080p. All things considered, it's a pretty substantial upgrade over the existing performance plus mode.

All of this may sound like a daunting variety of options, but they're presented to the player in a sensible enough manner and take comprehensive advantage of modern displays in a way that we haven't really seen in other major console software. I'd expect to see similar if not identical configuration options pop up in upcoming games like God of War: Ragnarok, though perhaps this scheme will be simplified as games become more demanding.

The Legacy of Thieves Collection fares particularly well with the unlocked modes, given the relatively low rendering resolutions that these games target relative to their age and visual complexity. We can properly max these games out now, and the results are impressive. I'm especially pleased with the performance unlocked mode, which pairs a reasonable 1440p resolution with smooth frame-rates that average around 100fps. The new 40fps 4K option plays very nicely as well of course, with stable performance despite rendering a full 4K pixel grid.

Ultimately, patch 1.002 is a great update to a capable conversion of the last two Uncharted experiences. All the options you could conceivably ask for are here and they all run better than expected. This is a perfect way to replay these games - or to experience the adventures for the first time.

Source: https://www.eurogamer.net/digitalfoundry-2022-uncharted-legacy-of-thieves-120hz-vrr-patch-unleashes-the-ps5-gpu
We use cookies to ensure that we give you the best experience on our website. If you continue to use this site we will assume that you are happy with it. Ok