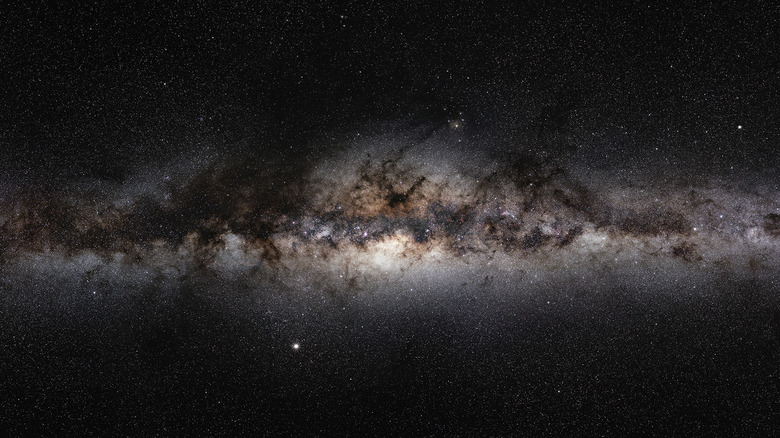 The formation of massive stars and the beginning of their death with a supernova is quite a cosmic sight, but their eventual descent toward becoming a black hole is an even bigger astrophysical mystery. However, the story doesn't end there. Experts at the University of Sydney have now discovered a massive graveyard of dead stars that are now living either as neutron stars or black holes.

And this is no small cosmic cemetery. The team behind the research, which has been published in "Monthly Notices of the Royal Astronomical Society," estimates that this burial ground of dead suns is roughly three times taller than the Milky Way itself. Claimed to be the first scientific map of its kind, the team started by retracing the path of a star's evolution and the eventual transformation into a black hole or a neutron star.

However, finding the graveyard was no easy task, because in the millions of years since their creation and death, the galaxy itself has transformed and is now buzzing with new stars. Instead, the team took into account motion dynamics like the push from a supernova explosion to predict where the dead bodies of stars will eventually land in the vast expanse. But it was no easy task and was only made possible with complex models that were fed details like a star's genesis spot, position at death, and the dispersal pattern while the galaxy itself continued to evolve.

A graveyard with corpses floating nearby

The modeling system helped scientists create a graveyard of ancient stars that once irradiated the Milky Way, but in doing so, a few more surprises were spotted. First, the puffed-up shape of the cosmic marble town is nowhere similar to the majestic spiral-arm look of the Milky Way. Instead, it resembles a halo around the galaxy. But this is apparently just the beginning.

Going by statistical predictions, the nearest neutron star from this galactic graveyard could be just about 62 light-years away, while a black hole might be as close as 68 light-years. As for the mass figures, the cemetery only accounts for approximately 1% of the Milky Way galaxy's total estimated mass. Another interesting revelation from the study is that nearly a third of the stellar remains have been pushed far away from the confines of the Milky Way galaxy.

This ejection from their home galaxy served as a reminder that cosmic kicks are more powerful than previously thought, and enough to push a massive body away from the gravitational pull in its star cluster and mother galaxy. Interestingly, active stars can also get cast away from their parent galaxy. In 2006, Harvard experts discovered a pair of castaway stars speeding away from the Milky Way at a pace of over 1 million miles per hour. This ejection can be gravitational or might come courtesy of a supernova kick, but there are a lot of stars out there living in intergalactic space.

Source: https://www.slashgear.com/1031990/this-graveyard-of-suns-bigger-than-the-milky-way-challenges-what-we-know-about-our-galaxy/
We use cookies to ensure that we give you the best experience on our website. If you continue to use this site we will assume that you are happy with it. Ok