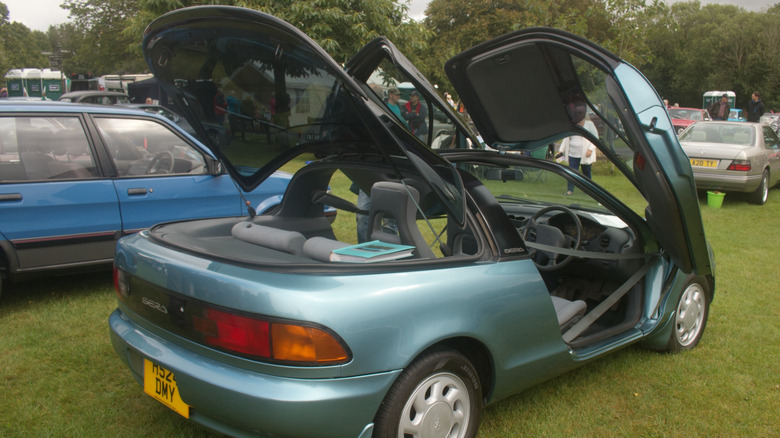 Back in 1926, Sakichi Toyoda founded the Toyota Industries Corporation so that he could build and sell the automatic textile looms he invented. Fast forward thirty-two years to 1958, and the company had evolved and branched into making and selling cars, the first of which was the Toyopet and sold in Hollywood, California. The company only managed to move a paltry 288 vehicles that year, a very humble and Suprasing start for an automaker that some fifty-five years later would be in a dogfight with Germany's Volkswagen over the title of world's largest car maker.

According to Edmunds, Toyota makes four of the top ten cars sold in the United States (RAV4, Camry, Highlander, Tacoma). Additionally, the Camry is the only vehicle on Edmunds' list that can brag about being a NASCAR racing car, an achievement it first made in 2007. It's still the only foreign-made car turning left on NASCAR tracks.

It's safe to say that Toyota isn't afraid to take the high line along the bank and do things differently when needed. Such is the case with the Sera, a model only produced in Japan.

Just another mass-produced car ... with wings!

The Sera first appeared as a supermini concept car known as the AXV-II at the Tokyo Motor Show in 1987. It was meant to show where the future of car design was headed. After being well received, Toyota made some adjustments and released it as the Sera in March 1990. The term "Sera" is the future tense of the French word être (to be) and was picked because Toyota felt it signified "a dream-like car that takes us into the future" (via Toyota UK Magazine).

The Sera was like many other cars. As Doug DeMuro points out in his deep dive video, it looks like the Nissan NX or a Mazda MX3. The front-wheel drive car had small wheels, tires, and a sixteen-valve, 1.5-liter inline-four banger (108 hp) under the hood. But the Sera came with a few significant differences that set it apart from every other car on the road.

First, it had funky gull-wing doors, a first for a mass-produced Japanese car. Even more impressive: It somehow inspired Gordon Murray when he went to develop the McLaren F1 supercar (via Toyota UK Magazine). Sticking a feature only previously seen on luxury cars, race cars, or high-end supercars was head-scratching, but it set the tone for the car's overall fun factor.

A byproduct of the gull-wing doors was that, when combined with the all-glass rear hatch, there was an all-encompassing wrap-around glass cabin reminiscent of a jet fighter. Sure, you'd get baked like a lobster, but at it came with air conditioning and power windows. Additionally, two insert panels came with the car that could be attached to the top of the doors (effectively the roof), where the sun was the most intense.

Last but certainly not least ... the Sera was fitted with a booming 10-speaker sound system that was overkill for most cars, let alone this tiny, mass-produced compact. According to Toyota UK Magazine, the Super Live Sound System was a much "sought-after" feature that was able to envelope the car's occupants "in one of the most radical audio systems Toyota has ever engineered."

Three tweeters lined the dashboard (right, mid, and left). It had speakers in each door, and a "Kelton-type Acoustic Resonance Woofer" sat in the trunk. The coup de grace was the monster sound bar mounted on the rear deck. Four speakers were housed inside and could be moved to "bounce sound waves off the glass and create an alternate audio image." And if that wasn't wild enough, the speakers could be put into a "Casual Mode" or... wait for it — a "Funky Mode." Yes, that was the official Toyota name for a speaker mode inside one of its cars.

With the swagger this little car kicked out, Toyota seemed intent on marketing it to a hipper, younger generation. Despite winning the 1991 Torino-Piemonte Car Design Award for production cars, it was only made for five years (1990 to 1995), and Toyota made less than 16,000. In the end, the Sera wasn't the dream-like car they'd hoped. Que será, será indeed.

Source: https://www.slashgear.com/1032164/the-toyota-sera-is-the-bizarre-sports-coupe-that-never-came-to-america/
We use cookies to ensure that we give you the best experience on our website. If you continue to use this site we will assume that you are happy with it. Ok