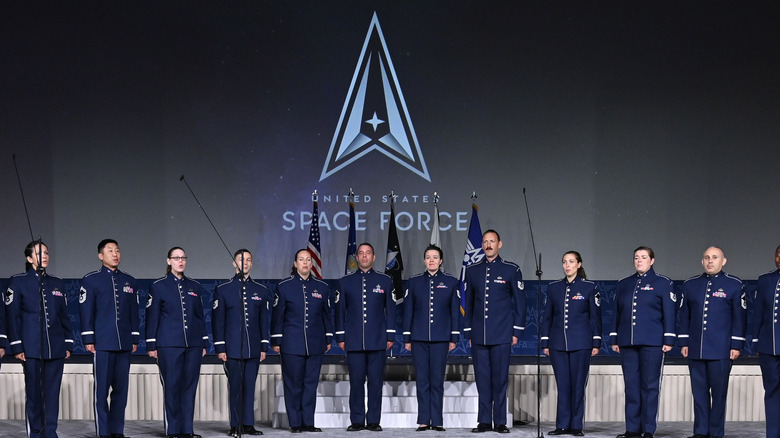 The United States Space Force, despite all of its good intentions, has been the butt of jokes since its inception. "Star Trek" fans were riled after seeing the military division's emblem and the blue suits. The name Guardians for unit members was ridiculed for being silly and video game-y. Then came a Steve Carell-led TV series of the same name, which brutally trolled the Space Force. Well, the space service branch of the U.S. Armed Forces now has an anthem, and to put it mildly, the internet isn't really a fan.

The song is titled "Semper Supra," which is Latin for "always above" — it's also the division's motto. According to the official Space Force press release, the anthem was "created to capture the esprit de corps of both current and future Guardians," among other things. The song's creation is steeped in military heritage. James Teachenor, who served in the U.S. Air Force band, wrote the lyrics and composed the melody. Sean Nelson, U.S. Coast Guard Band trombonist, subsequently added the 30 instrument tones and harmonized the music.

Before zeroing in on the final version, a total of 12 review submissions were made, and it took "many months of development, revisions and variations" before "Semper Supra" was picked as the final anthem that would pump patriotic energy into the veins of Guardians as they prepare to take on enemies in space and beyond. However, not everyone shares the same opinion, especially the ever-critical Twitterverse and irredeemable Reddit commenters.

Many people think the song sounds old and cheesy 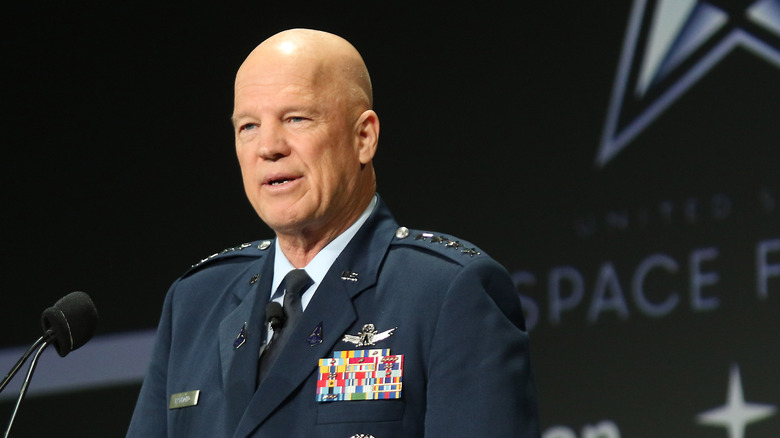 Talking to The New York Times, professor Raoul F. Camus from the Queensborough Community College remarked that he didn't "want to use the word 'laughable,' but come on." He further added that the anthem was knocking at the limits of what patriotism really stands for. Kevin Baron, the executive editor of DefenseOne, tweeted that the "lyrics are awful." In a subsequent tweet, Baron clarified that he thinks the "lyrics are the verbal word salad version of a bad Air Force painting." But not everyone's reaction was as kind or sophisticated.

The moment you've all been waiting for: The Space Force has unveiled its official song pic.twitter.com/v6CG3I4sYD

One Andrew Nadeau called it a rip-off of the very oddly titled Mel Brooks song "Jews in Space." George Takei, who portrayed the beloved character of Hikaru Solo in "Star Trek," tweeted a succinct "Oh dear" with a cringe face emoji on Twitter, and the message was quite clear. Some folks apparently like the vintage vibes, but not everyone sees the appeal. One Twitter user quipped that the anthem "makes me want to go to fight aliens in the year 1895."

Mashable said on Twitter that its team thought the song was "fake," while Duffel Blog thinks the song "sounds like it was written and recorded decades before we ever first went into space." Comedian Jimmy Kimmel, Politico's defense editor Dave Brown, and talk show host James Corden were among the folks who had some not-so-kind opinions to share about the song. If you happen to be a fan, kindly indulge in this behind-the-scenes video. For real, let's hope aliens aren't music connoisseurs, or else they might hear the track and decide to annihilate Earth.

Source: https://www.slashgear.com/1020947/the-new-space-force-anthem-has-social-media-laughing/
We use cookies to ensure that we give you the best experience on our website. If you continue to use this site we will assume that you are happy with it. Ok