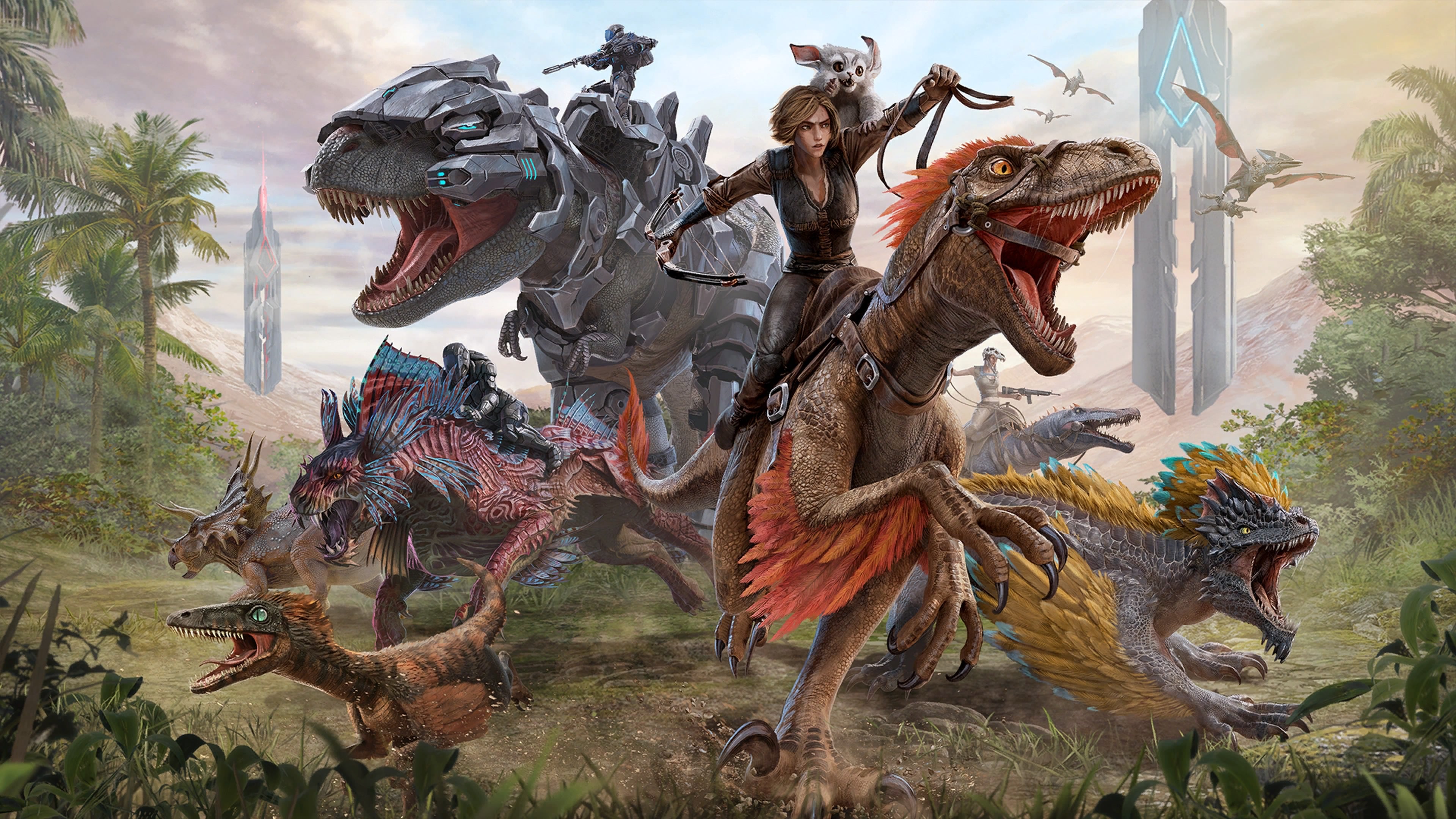 One of the worst ports ever is now a good-looking, playable experience.

It's one of the most infamous Digital Foundry stories of all-time. The original version of Ark: Survival Evolved arrived with a mixture of shock, horror, befuddlement and amusement owing to its incredibly bad visuals, ultra-low resolution, lack of detail, LOD popping issues, slow loading and the fact that often, textures did not seem to load at all. However, a couple of months ago, we were approached by representatives of the studio, saying that an all-new Switch version was coming - and they were eager for Digital Foundry to check it out.

Let's be clear here, while we're not exactly big fans of the Ark concept, the new version of the game is completely transformative. It's one of the biggest improvements we've ever seen, turning the game from a hideous, unplayable mess into one of the more impressive Unreal Engine 4 titles we've seen on Nintendo Switch. It's been rebuilt from the ground up and addresses virtually every criticism we had of the original game.

John Linneman and Alex Battaglia share their thoughts on the new version of Ark for Nintendo Switch.

Nothing of the original version has been brought over to this new edition. In fact, it's based on a relatively recent Xbox codebase running on Unreal Engine 4.26 - a more modern, mature version of the Epic technology. First impressions are very positive: the extremely low resolution of the original release gives way to a pleasing presentation. Developer Grove Street Games targets 1080p and 720p for docked and portable play respectively, with dynamic resolution working in combination with TAA upscaling to deliver a clean look. The DRS window varies from 55 percent to 100 percent of output resolution, but typically what I saw seemed to operate at around the 70 percent mid-point. Either way, it holds up well.

The engine is also used intelligently to mitigate the technological limitations of the Switch's mobile chipsets. While shadow map quality is massively improved from the first version, the developer uses cheaper SDF shadows for more distant shading. Unreal Engine 4's run-time virtual texturing is deployed to intelligently manage assets, prioritising higher detail textures near the player. Meanwhile, adaptable scalable texture compression reduces the data footprint overall to around two-thirds the size. This has a knock-on effect on loading times - famously, in the original video on the game, I played through Contra 3 on Super NES while Ark loaded on Switch. In similar tests with the new version, loading completed in around 24-25 seconds. 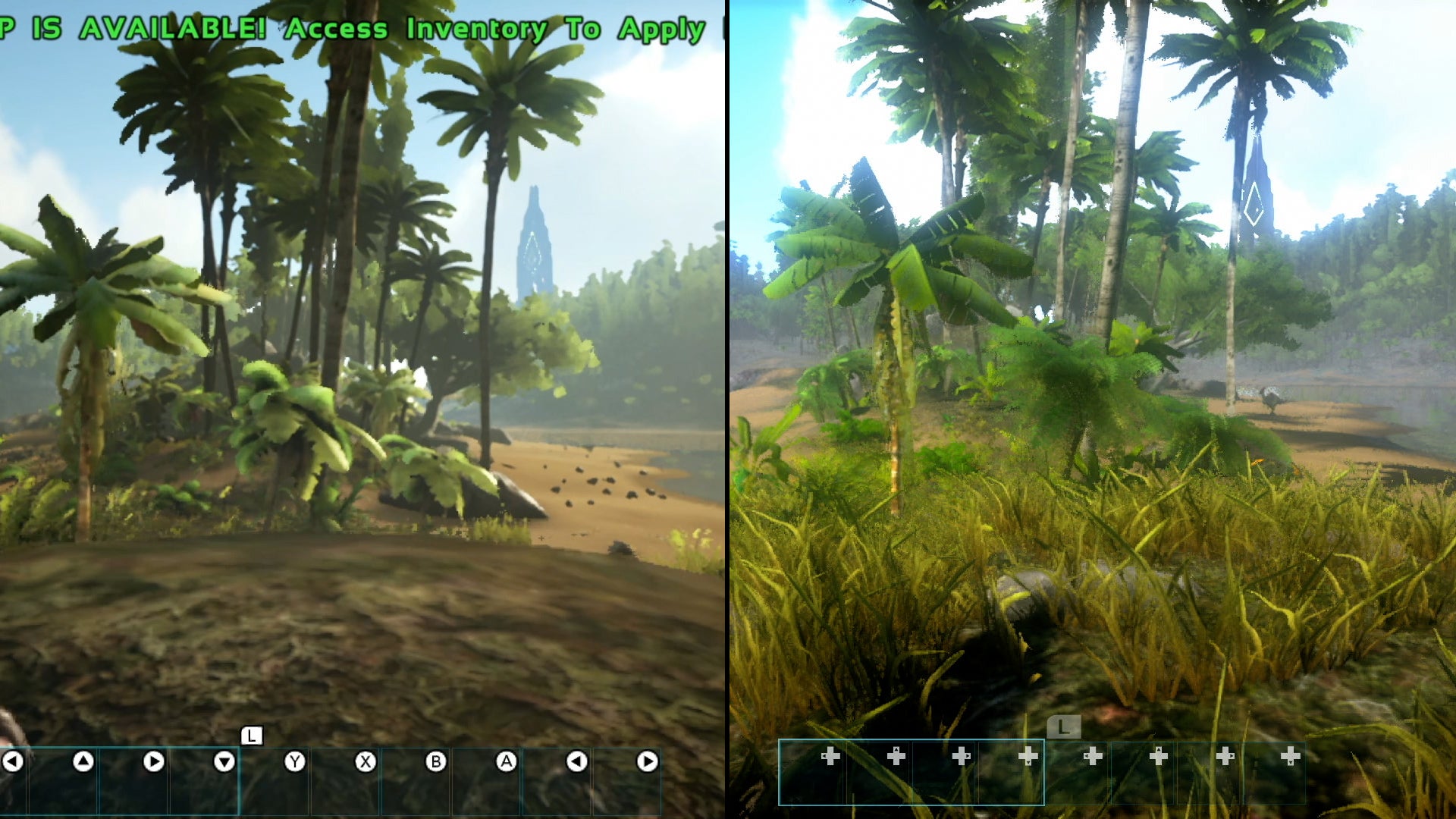 Like-for-like comparisons impress - but in motion the improvement is far more pronounced.

Even with its terrible loading times, the original Ark stuttered badly in-game - this is now resolved in the new version. The game's problems with texture data not loading at all is also fixed, while LOD pop-in (while still present) is improved by an order of magnitude compared to what we witnessed before. Even the user interface has been substantially improved - there's still a PC-like feel but there's a Destiny-style cursor and better organisation of the menus to make it easier to use.

Frame-rates are also improved but it's worth adding an asterisk to this. Ark: Survival Evolved has never been a particularly performant game on any platform. In terms of both CPU and GPU, it pushes host hardware to an often unreasonable degree. That being the case, expect fairly complex areas to hover in the 24-27fps area, with only less stressful environments hitting the game's 30fps cap. It looks like frame-rates can reduce further during online modes but ultimately, while far from perfect, it is at least playable - and falls into line with general expectations.

OK, so the original Ark port video may not reflect the state of the game now, but still has a certain degree of entertainment value.

Both developer and publisher deserve kudos for this new revision of Ark for Nintendo Switch, especially as owners of the original version automatically receive this transformative upgrade to the new version at no additional cost. Some might say it's the least they could do, but equally, it's extremely rare that an existing game is entirely scrapped, rebuilt from scratch by a different developer and then given away for free to existing owners of the game. One of the only other examples I can think of is Konami's Zone of the Enders: The Second Runner, which essentially received an HD remaster of the original HD remaster, courtesy of Japanese developer HexaDrive.

So, if you're into Ark: Survival Evolved, the new Switch Ultimate Survivor Edition is well worth looking into. And if you own the game already, we'd also recommend giving it another chance - the improvements are legion, to the point where it's one of the better UE4 titles for Nintendo Switch, a system that isn't exactly best equipped to handle the kind of open world gameplay the experience is built around. Everyone loves a good redemption story - and this one is up there with the best.

Source: https://www.eurogamer.net/digitalfoundry-2022-the-new-ark-for-nintendo-switch-is-a-brilliant-redemption-story
We use cookies to ensure that we give you the best experience on our website. If you continue to use this site we will assume that you are happy with it. Ok