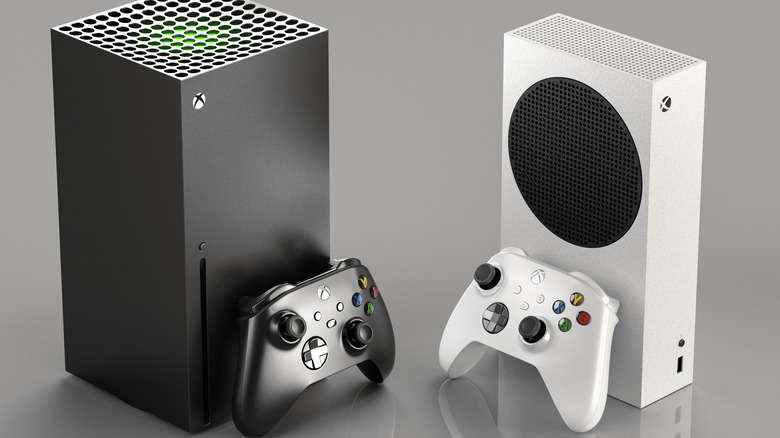 We may receive a commission on purchases made from links.

Microsoft's latest generation of consoles, the Xbox Series X and S, have a unique feature — the ability to play almost every game going back to the original Xbox through back compatibility. Thanks to speedy storage and a powerful AMD-designed APU unit, they're no slouch playing modern titles. The main drawback is the limited internal storage space. The Xbox Series X has roughly 802 GB of usable storage, while the Xbox Series S has only 364 GB. Looking at modern game sizes, like "Call of Duty: Modern Warfare II" at 121.2 GB, you can see how quickly that internal drive can fill up.

Microsoft allowed the Xbox Series X and S to plug in external storage drives to expand the usable capacity. There's even an official storage expansion card, which is expensive but runs at the same speeds as the internal drive so that you can run modern games off it. External drives connected via USB can only boot back compatible games from prior console generations or those downloaded from Game Pass. An external drive can also temporarily store current-generation game data, so you don't have to re-download it. Because you're limited to older games, the type and speed of the external drive matter less — they all load games in a similar timeframe. That doesn't mean you should grab any no-name external hard drive. We've compiled a list of our favorite external hard drives for your Xbox Series X or S based on reliability and cost.

The Xbox Seagate Storage Expansion Card for Xbox Series X|S is the only external storage option that allows the boot up of next-gen games and playing them. The proprietary card slots into the Xbox Series X or S to deliver the total bandwidth of the custom SSD technologies used in the console. You should expect your console to act as if your internal hard drive got extended to a higher capacity because that's essentially what happens when you plug it in.

Seagate still has an exclusivity deal for the technology, meaning only one manufacturer is selling the expansion cards. Available in 512GB capacity ($109.99 MSRP at Amazon), 1TB capacity ($199.99 at Amazon), and 2TB capacity ($359.99 at Amazon), the expansion cards have often retailed higher than that price during the ongoing chip shortage. That higher price might be worth it to you if you prefer the convenience of having more of your Xbox Series X or S games installed on storage that behaves as if it was an internal drive. 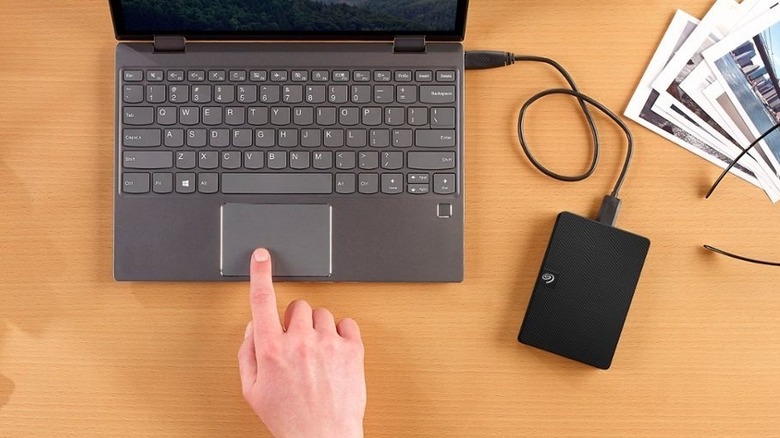 USB-based external hard drives to be used with your Xbox Series X or S fall into two camps — spinning hard drives or solid-state drives. Buying a mechanical spinning hard drive gives you more gigabytes for your dollar. Seagate's Expansion portable series uses USB 3.1 Gen 1 connectivity for plug-and-play compatibility with your console. The drive doesn't need an external power supply, pulling all the energy it needs through its USB micro-B to USB-A cable. Thanks to its size, the Expansion range is easily movable which is handy if you have multiple Xbox Series X or S consoles.

The platters inside the drive spin at 5,400 RPM. That would have meant read and write speeds near 75 MB/s (via Datarecovery.com) but thanks to using newer drive technology those speeds will be higher. That's enough speed to run Xbox One titles without upgrades, or backward compatible Xbox 360 or original Xbox games. The 2TB model triples your Xbox Series X's storage for $89.99 (at Staples), or you can add up to 5TB of storage for $149.99 (at Amazon) and go wild downloading Game Pass titles.

Western Digital is one of the leading names in data storage and this WD Elements is a no-frills, budget-friendly portable hard drive with 4TB of capacity. It uses a 5,400 RPM hard drive which gives all the speed you'd expect from a modern drive that isn't using solid-state tech, which is enough performance to play backward compatible games once installed on the drive. The USB 3.1 Gen 1 connectivity through a single micro-B to USB-A cable meets the Xbox Series X or S's requirements for an external hard drive.

You can drop down to a 1TB capacity to save some cash, or increase up to 5TB of total storage capacity from a drive that will slip into your jeans pocket with ease. The cost per gigabyte is attractive, with the 4TB model costing $105.99 (and can often be found with deep discounts). That amount of storage could let you install up to a hundred Xbox, Xbox 360, or Xbox One titles, nearly a quarter of the total titles available on Game Pass. Other capacities include 1TB for $57.99, 2TB for $65.99, 3TB for $94.99, or 5TB for $115.99.

Game Pass is continually adding more backward-compatible titles which presents a problem — where to store them all. To get enough storage capacity we need to start looking at external drives that require an external power supply. Western Digital's My Book desktop external hard drive stashes a 5,900 RPM 3.5" desktop hard drive inside its nondescript shell. That's a good thing for gamers that don't need their storage devices to match their consoles and the plain WD branding saves your wallet a few dollars to boot.

This desktop-class external hard drive needs an 18W external power supply to run. That means sacrificing yet another socket behind your TV cabinet which is worth it for adding eight times the internal storage. Install nearly half of the current Game Pass catalog at any one time so you never have to worry about hogging the bandwidth to download new games. It's perfect for budget-conscious gamers who don't want to worry about slow internet speeds or running out of storage. Expect to pay $105.99 for 4TB, $126.99 for 6TB, or$189.99 for 8TB, $252.99 for 12TB, $294.99 for 14TB, or $347.99 for 16TB. WD does sell an 18TB version, but the Xbox Series X or S can only use drives with a maximum capacity of 16TB (via Microsoft). 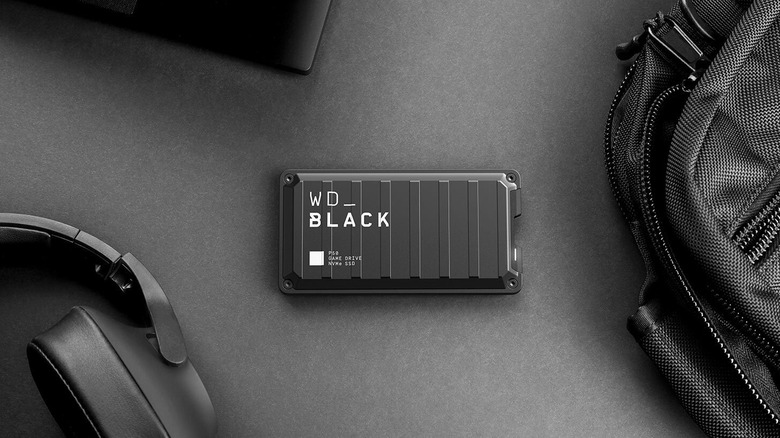 WD_Black is Western Digital's gamer-focused subbrand and the P50 is their flagship external solid-state drive. Featuring NVMe storage it has up to 2,000 MB/s read speeds thanks to a 20GB/s USB 3.2 Gen 2x2 interface on a USB-C port. WD_Black drives are ruggedized, and this external will take a few knocks and keep on gaming thanks to having no moving parts inside. WD puts its money where its mouth is with a five-year warranty, which is 5x the warranty that most external hard drives come with.

You can get the P50 Game Drive in 500GB capacity ($136.99), 2TB capacity ($368.99), or 4TB capacity ($526.99). It'll also work with your PC or other consoles. The thing is, you're spending a lot of money for something that your Xbox Series X or S won't be able to fully access. The only games that will boot from this drive are those from the Xbox One or earlier consoles. Xbox Series X or S games can still be archived on this external solid-state drive but you won't be able to play them from it. Swapping files between the internal drive and this external one will be substantially faster than using an external hard drive which could be worth it to you if you swap out titles regularly. As always, your mileage will vary. 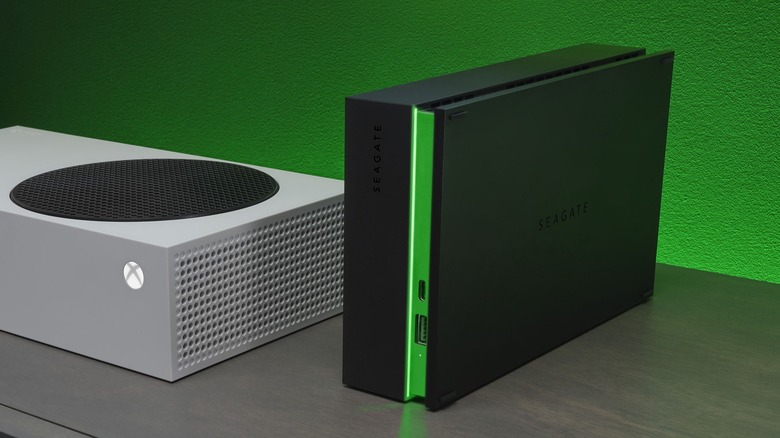 Seagate has long been an Xbox partner for storage, creating co-branded external drives for Xbox consoles and the Storage Expansion Pack for the Xbox Series X and S. The updated Game Drive Hub for Xbox is designed to match the Xbox Series X with its black enclosure and RGB LED lightbar that is Xbox green by default. For $259.99 it offers 8TB of hard drive storage, and front-facing USB-A and USB-C connections over USB 3.2 Gen 1, for putting your other peripherals on charge or daisy-chain an external SSD into the storage mix.

Seagate also includes a code for a month of Xbox Game Pass Ultimate so you can get gaming immediately and start filling up that spacious hard drive. The company says you can fit up to 200 Xbox, Xbox 360, and Xbox One (without enhancements) on the Game Drive Hub. It also comes with three years limited warranty and three years of Rescue Data Recovery Services just in case something goes wrong. 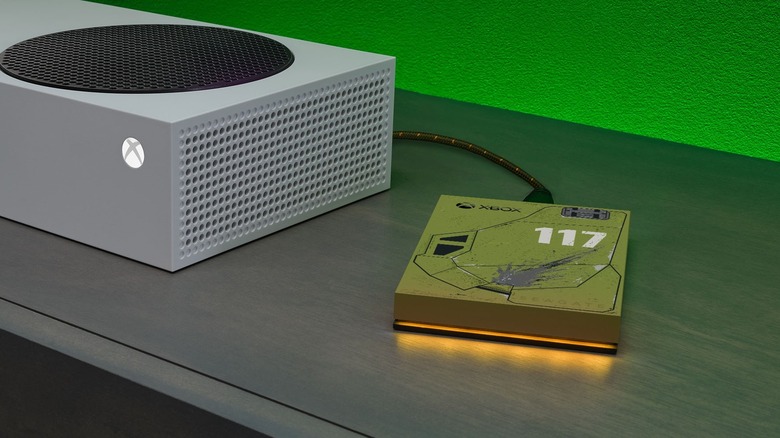 What Xbox fan's console would be complete without something with Halo branding? The game that was a launch title for the original Xbox has undergone many changes in the two decades since. Still, the Master Chief has stayed an unyielding defender of humanity. This Master Chief-styled external hard drive is in his signature green, with an RGB LED lightbar. Storage options include 2TB for $99.99 (at Amazon) or 5TB for $271.99 (at Walmart).

The external game drive doesn't require external power, using the USB 3.2 Gen 1 bus for both power and data. Seagate is an Xbox partner for hard drives, and the Game Drive range, including this special edition, is Xbox-certified to work with the Xbox Series X or S. The Game Drive also comes with a one-year limited warranty and three years of Seagate's Rescue Data Recovery Services in case anything goes awry. You won't be able to play Halo Infinite if installed on this drive, even if you can play every previous title. 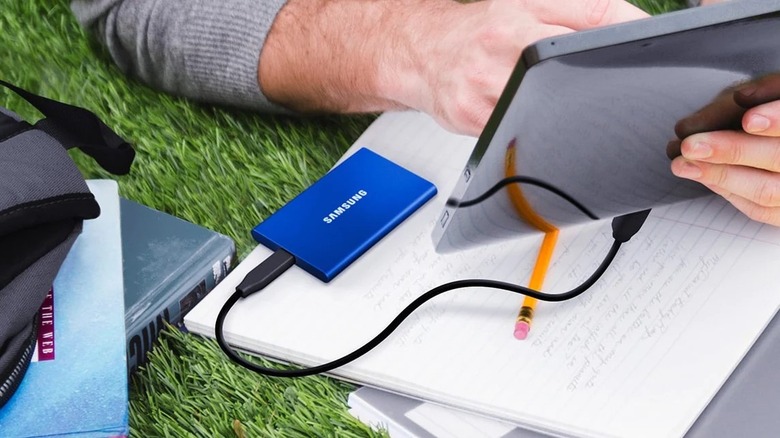 Samsung makes some of the best external SSDs, and the T7 is no exception. When it came out two years ago, Samsung said it was the fastest external hard drive using USB 3.2 Gen 2. Expect speeds of up to 1,050 MB/s read and up to 1,000 MB/s write rates. While the NVMe interface is fast, you'll be limited by the 5 Gb/s max speeds of the Xbox Series X or S's USB ports. That's more than enough to shuttle games from your Xbox Series X or S's internal solid-state drive or to play backward-compatible games from earlier Xbox console generations.

The T7 is only slightly larger than a credit card holder. It's covered in a sturdy, anodized aluminum case, so it'll be hard to break. Samsung also includes a handy USB-A to USB-C cable so you don't need an adapter to plug it into your console and it has three years of warranty. Expect to pay $89.99 for 500GB capacity, $109.99 for 1TB of capacity, and $209.99 for 2TB of capacity at Samsung's website. 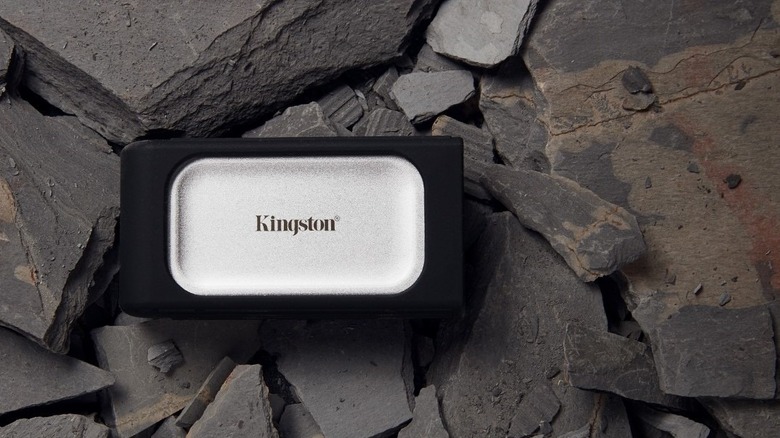 You don't need an external solid-state drive for your Xbox Series X or S. Backward-compatible titles from Game Pass will play just as well from an external hard drive than from a faster solid-state storage option. That said, something is alluring about packing up to 4TB of games onto something not much bigger than a USB thumb drive. The XS2000 is a rugged portable SSD IP55 rated to survive dust and water. 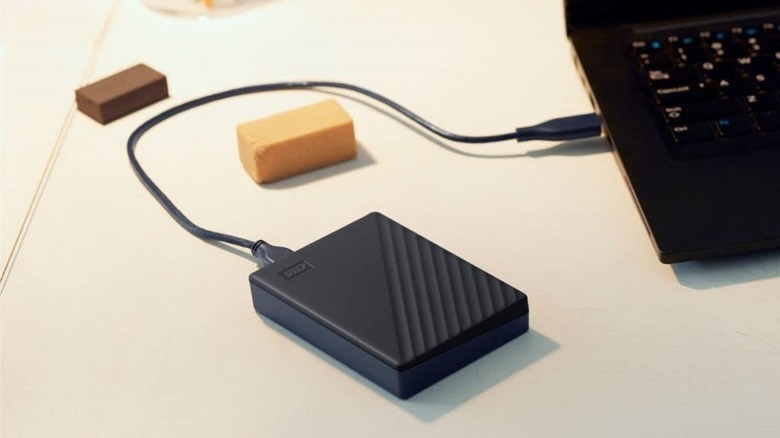 Western Digital's external hard drives are dependable and portable. The My Passport range isn't as fast as some of the solid-state drives on this list, but you will still be able to store and play Xbox One and older games on this drive, and you can stuff up to 5TB of external hard drive storage into your pocket for $124.99. That's a winning price per gigabyte. You don't have to sacrifice style for the wallet-friendly price. Western Digital sells these in black, white, red, and a kind of aqua color.

Source: https://www.slashgear.com/1177673/the-10-best-external-hard-drives-for-your-xbox-series-x-or-s/
We use cookies to ensure that we give you the best experience on our website. If you continue to use this site we will assume that you are happy with it. Ok