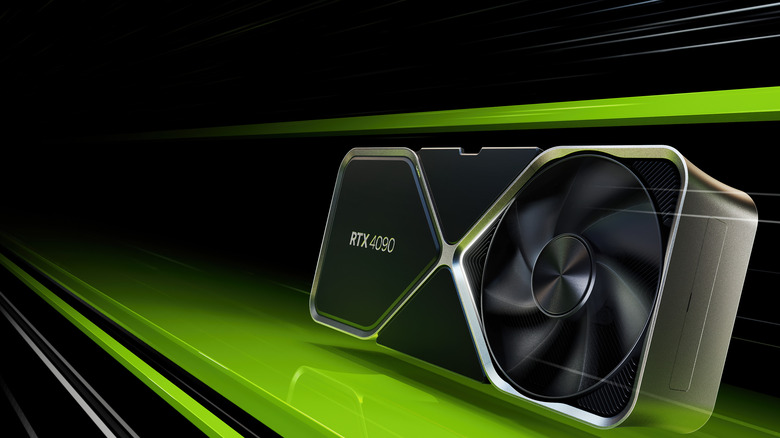 Nvidia has lifted the covers on its next-gen GeForce RTX 4000 series graphics cards based on the Ada Lovelace architecture, which promises a 4x performance boost generation-over-generation in certain games. Say hello to the GeForce RTX 4080 and its all-out enthusiast-class sibling, the GeForce RTX 4090.

Touted to be twice as fast as the GeForce RTX 3090 Ti without any bump in the power consumption, the Nvidia GeForce RTX 4090 GPU will be up for grabs starting October 12 with an asking price of $1,599. The company notes that in ray-traced titles such as "Cyberpunk 2077" and "Portal" that take advantage of DLSS 3 tech, the GeForce RTX 4090 will deliver up to a 4x uptick in performance. Creative tasks like 3D rendering and video exporting, on the other hand, are said to be 2x faster.

Coming to the GeForce RTX 4080, Nvidia claims it is twice as fast as the GeForce RTX 3080 Ti. Interestingly, the company will be offering it in 12GB and 16GB GDDR6X memory flavors, priced at $899 and $1,199 respectively. This one is slated to hit the shelves in November, but EVGA won't be among the brands carrying them.

Nvidia claims that all the raw firepower crammed into the new GeForce RTX 40 series graphics card allows them to touch the limits of 360FPS gaming on a 1440p screen. The updated Founders Edition trim of these new cards takes a single cable approach with a PCIe Gen5-compliant 16-pin connector and an upgraded 23-phase power supply.

The new Ada Lovelace architecture relies on the 4nm fabrication process and makes the leap to a max of 76 billion transistors on the GeForce RTX 40 series GPUs, up from the 28 billion peak hit by the previous-gen graphics cards. In addition to increased overclockability, the Ada Lovelace architecture leapfrogs the Ampere generation with twice the performance, while net shader power touches an impressive 83 TFLOPs, a significant jump from the GeForce RTX 30 series' best of 40 TFLOPs. The new Shader Execution Reordering tech is claimed to deliver 25% higher frame rates in games. The third-gen ray-tracing cores are said to offer 2.8x higher performance, while the fourth-gen Tensor cores promise 4x higher throughput.

Another standout announcement coming from Nvidia's webcast was the reveal of DLSS 3. Short for Nvidia Deep Learning Super Sampling 3, this in-house graphics processing tech bound to the Ada Lovelace architecture takes the leap from pixel processing to generating altogether new frames with some help from cutting-edge AI. Nvidia claims that DLSS 3 can boost frame rates by up to 4x in games that rely heavily on ray-tracing. Even in CPU-leaning games, the performance gain can be up to 2x. Touted to be one of Nvidia's "greatest neural rendering inventions," DLSS 3 will weave its magic on 35 games and apps — including "Cyberpunk 2077," "Witcher 3," "Dying Light 2," and "Portal" — starting on October 12.

Source: https://www.slashgear.com/1016888/nvidia-announces-rtx-40-series-gpus-and-dlss-3-with-rtx-4090-leading-the-charge/
We use cookies to ensure that we give you the best experience on our website. If you continue to use this site we will assume that you are happy with it. Ok