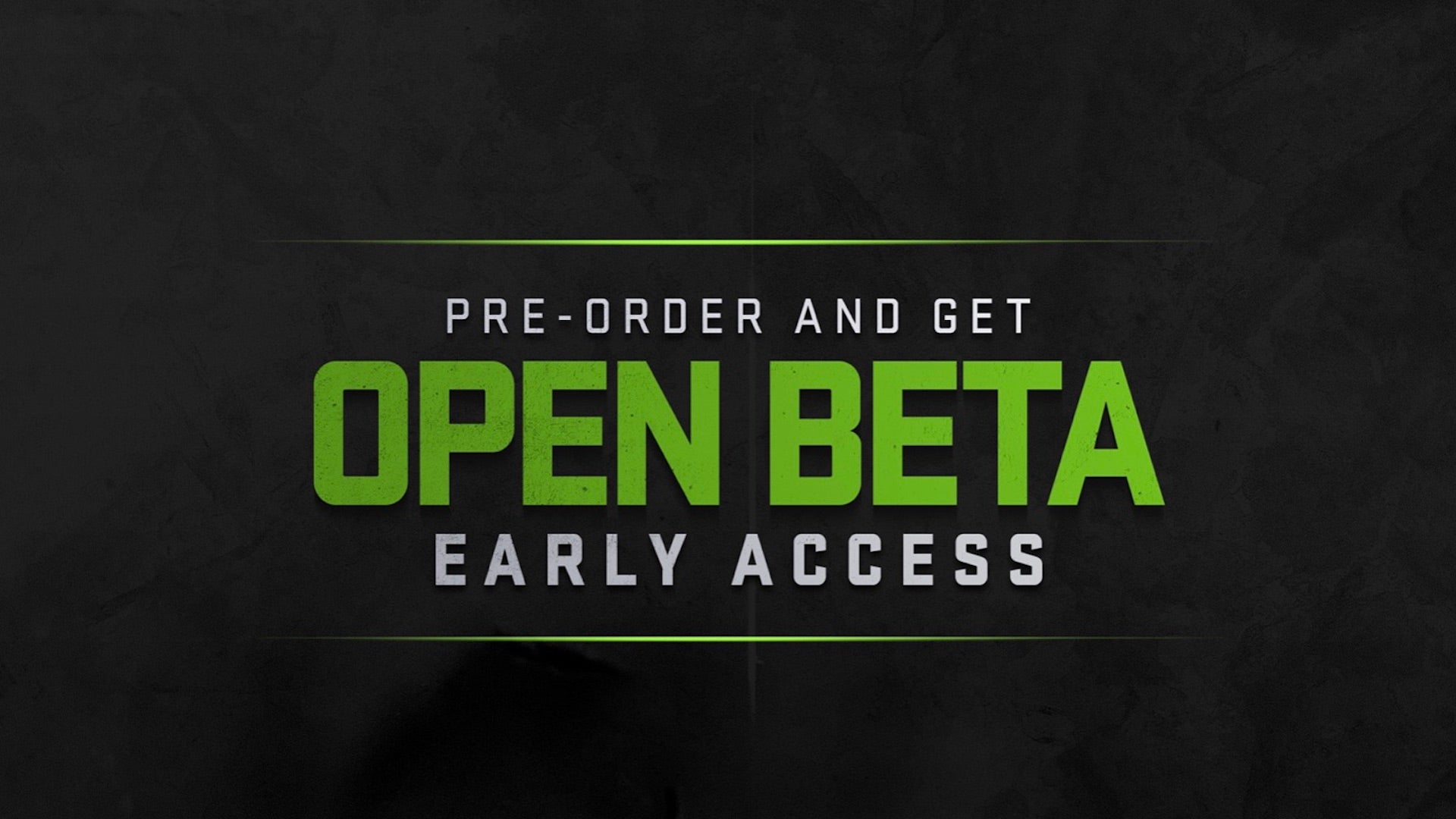 Call of Duty Modern Warfare 2's open beta has ended. It was a trial I entered with an open mind. Though I found the visibility and repetitive inputs of Modern Warfare 2019 difficult, I put a lot of hours into it. Subsequent entries felt worse due to a regression in graphical fidelity, but I still crave what Call of Duty offers.

Not fast-paced gunplay, but a game without commitment. Rather than knowing I have to devote hundreds of hours to the experience, I can fit in sessions across a range of timeframes thanks to multiplayer matches lasting around 15 minutes and frequent checkpoints in the campaign.

It's disappointing then that in three years between Modern Warfare entries, accessibility doesn't appear to have progressed. Admittedly, what we've seen during the last two weekends has been restricted to multiplayer, but the settings available informs what we're likely to see in the full release.

That the beta immediately dropped the player into a marketing screen, with no instruction of how to exit, wasn't ideal. More than once I tried to back out and was booted back to the connection screen. 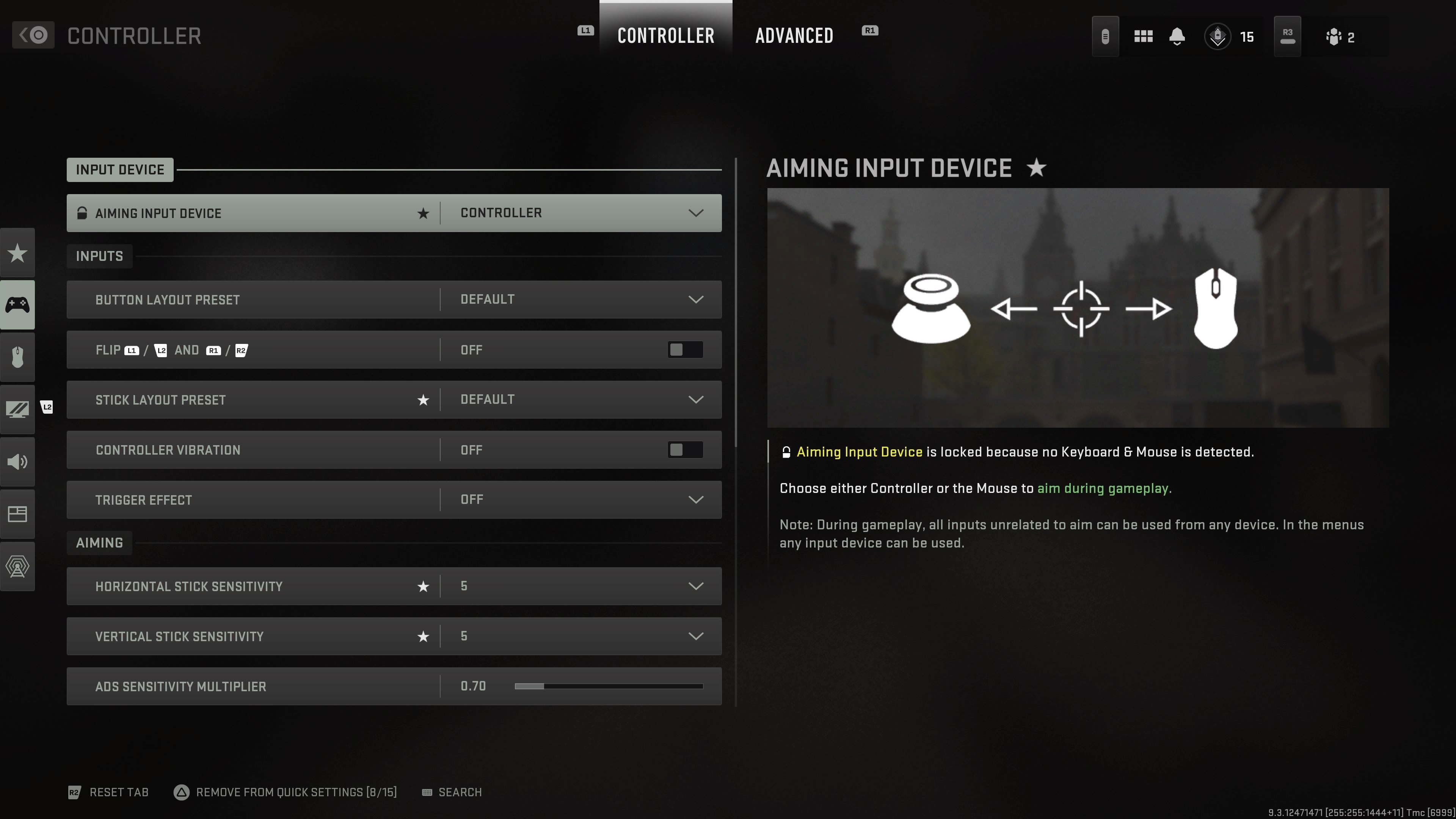 A screenshot of one section of the settings in the Modern Warfare 2 open beta, showing options to change input device, change certain button layouts, and adjust sensitivity.

Accessing settings outside of a match was difficult in itself, as they were hidden behind a small, unclear options prompt on PlayStation 5.

What options were available focussed on colourblind filters and button remapping. Other aspects were more general. You could reduce motion blur and sharpen graphics (no amount of fiddling with which improved visibility for me), alter the FOV, and have impressive control over dead zones and look sensitivity. Also helpful, given the obfuscation of the beta's menus, were options to alter the size of the UI and text.

There isn't much difference between the settings found in Modern Warfare 2019 and its sequel's beta. Indeed, settings across the last three renditions of Call of Duty have been startlingly similar and there's little indication in the beta that Modern Warfare 2 will offer anything but a basic - at least, as defined by Game Accessibility Guidelines - level of accessibility. 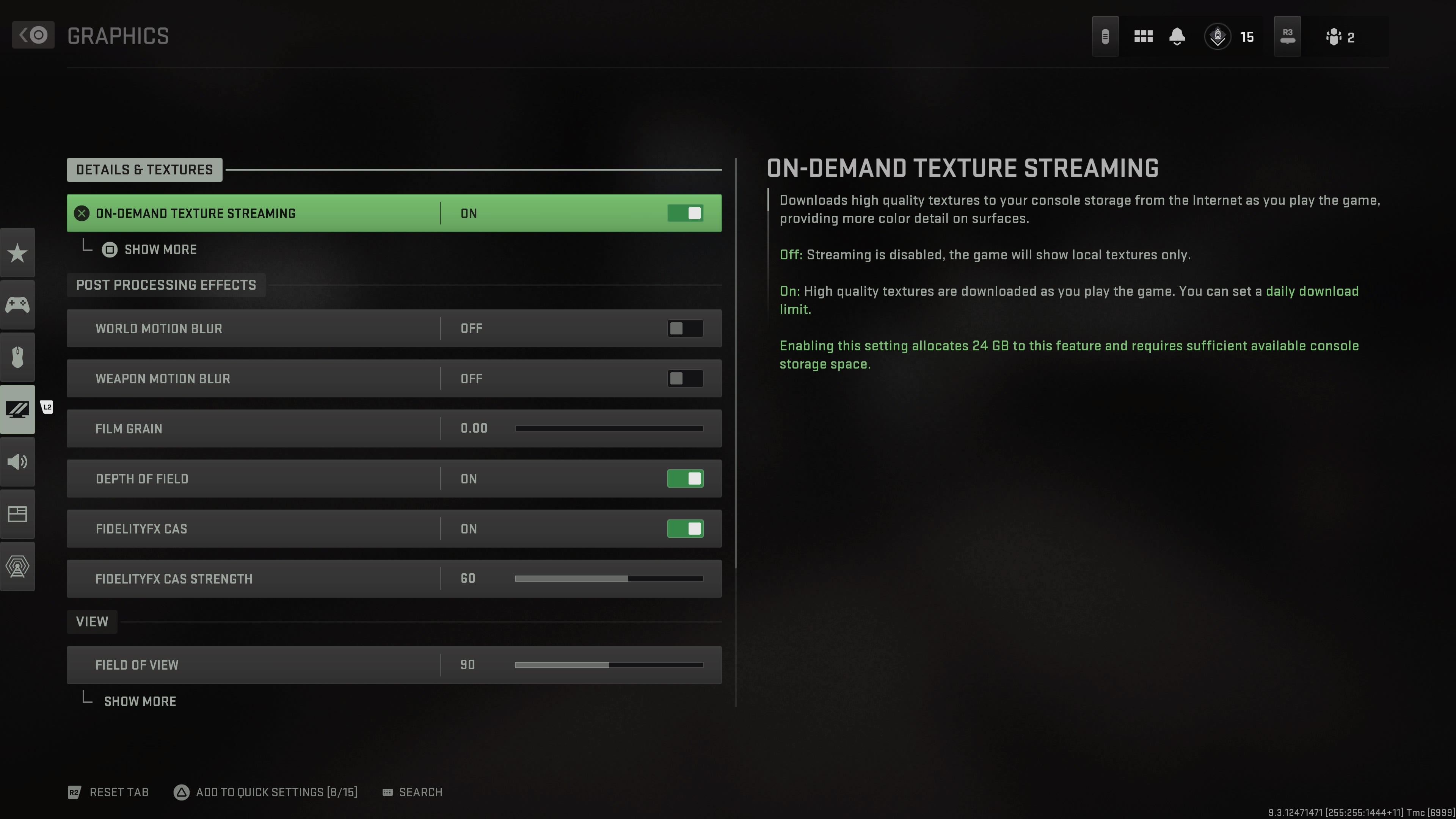 A screenshot of the graphics section of the Modern Warfare 2 open beta's settings. Demonstrated are the ability to alter the field of view (FOV), various graphics adjustments including motion blur and film grain, as well as explanations as to what these settings do.

Infinity Ward has maintained across both recent entries in the series that it wants to encourage a range of playstyles, something that has drawn criticism from a vocal, unpleasant core of existing players. If that is the case, it would be good to see some evidence of that.

I asked disabled gamers on Twitter for input on what this evidence might look like from their perspective. Some suggestions like aim assist, potential toggling, and sensitivity adjustments are already implemented - at least, partially. 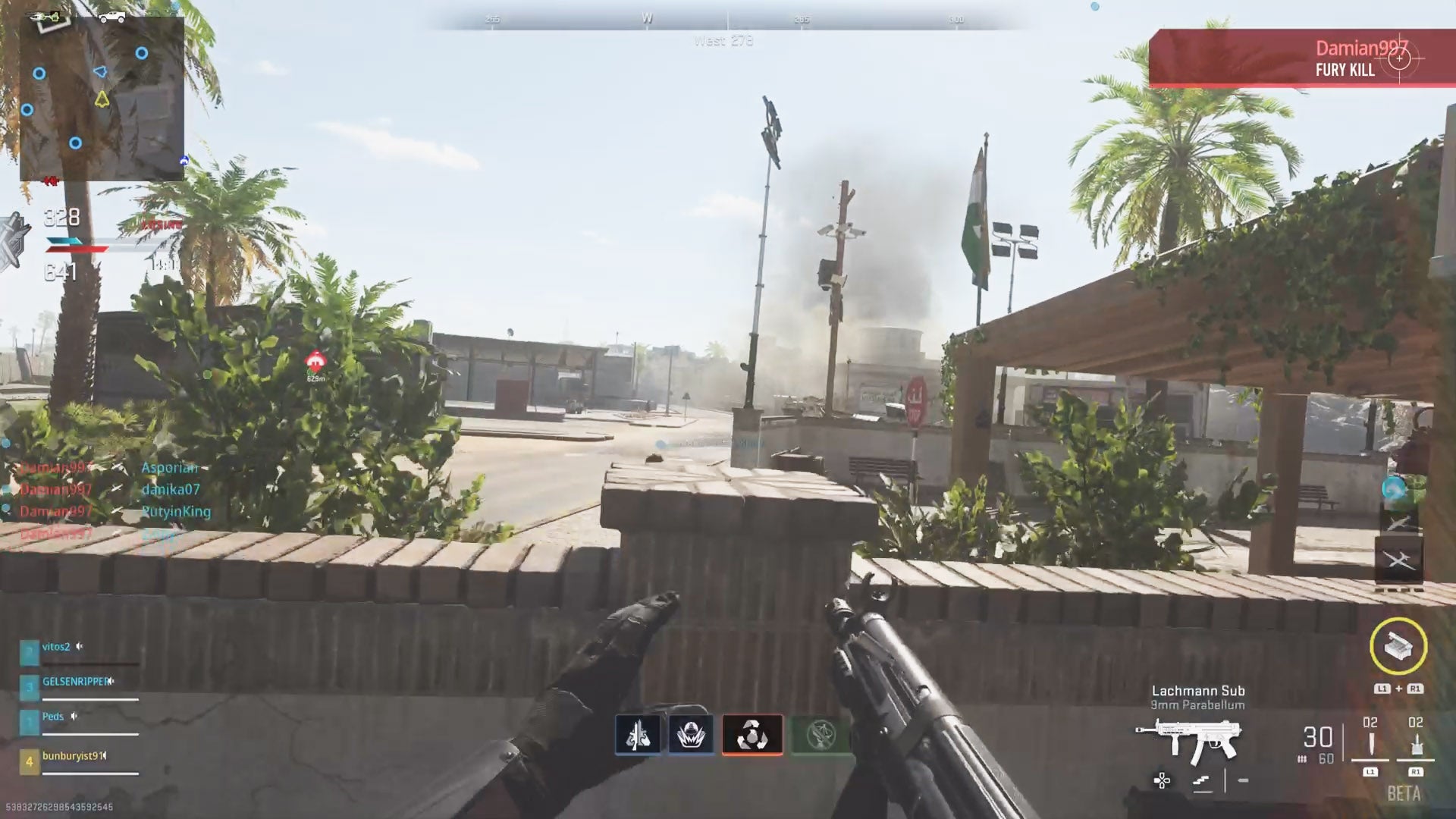 A wide range of visual effects that bombard the screen, including the rainbow effect shown here, but also including blurring, plumes of smoke, and damage filters contribute to the game's lack of visibility.

Others like damage sliders are, perhaps, difficult to balance in online multiplayer but should be standard in single-player modes and private matches. Certainly, these should be sliders and not the general presets found in past iterations. So, too, is it frustrating not to see options for single-stick modes, auto-movement, or screen-reading.

Nor did Infinity Ward mention accessibility in its response to feedback on the beta's first weekend. So, it appears unlikely greater accessibility is forthcoming.

It's a lack of progress that suggests Infinity Ward, and Activision, isn't understanding the relationship between its potential players' capabilities and the obstacles present in its games. Yes, these mechanics may play well in competitive spaces. But it's leaving huge swathes of players behind with little done to address the barriers that are firmly entrenched in the series.

For instance, visibility in Call of Duty has been problematic for some time. Rather than implementing some form of contrast mode, Infinity Ward removed the nameplates from opposing players in the open beta making visibility worse.

This could be improved by adding colour to uniforms. Might this chafe against the realism a lot of players crave? Perhaps, but a few weeks after release multiplayer will be inundated with cat ears and anime-inspired tracers. Sure, that's part of why Activision might not go for it, given how lucrative selling skins is for the publisher. But if it's an option for players like me, it could be turned off.

This is coupled with the community's ongoing frustration with varied styles of play, which, in itself, is a complaint that ignores accessibility. Many players struggle with the rushing style many of Call of Duty's vocal fans promote. Instead, other methods of play are more comfortable. For some, that means hanging back and sniping for a more manageable experience. For me, it's about setting up guns for hipfire, drastically limiting my options but reducing repetitive inputs.

We can criticise Infinity Ward for the lack of accessibility evidenced in the open beta, but we also need to understand that the community around the game - and Activision's relationship with it - isn't helping. 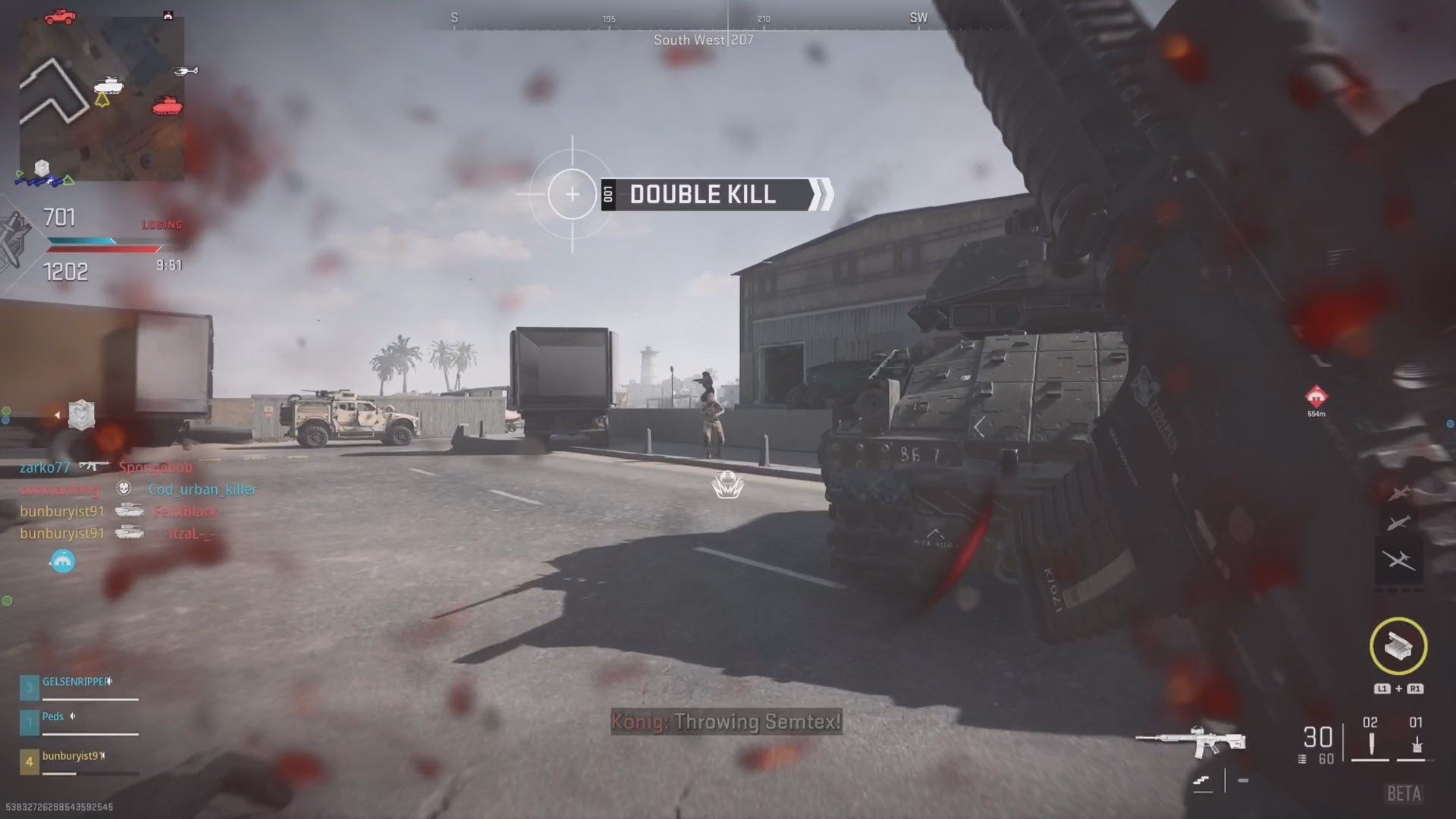 It can be difficult to know what's going on in the open beta with a huge number of different filters laid over the screen to denote damage, dirt, and disorientation. This is exacerbated by the decision to remove enemy nameplates, as shown in this image in which two enemy players appear without any identifying markers, merging with the background and foreground effects.

When you refuse to implement adequate accessibility, it's no longer about slow progress but a deliberate exclusion of groups of players, seemingly for the sake of retaining a core of vocal players whose attitude towards accessibility and the change it represents in the series isn't favourable.

Because if there's one thing Call of Duty fans fear - more than changes to their beloved mini-map, more than someone sitting in a corner - it's change.

This may sound unnecessarily inflammatory, but if you'd spent as much time in Call of Duty discussions as I did researching this you might feel less than charitable about a core of players vehemently against accessibility while they make petty complaints.

That Activision's studios are more willing to cater to these groups, than to as wide a chunk of the gaming population is an odd stance. Given how mercenary Activision is, to exclude a huge potential market is, if nothing else, stupid.

Not that anyone is under the illusion that implementing greater accessibility would be easy. Three years on, it's pretty clear the IW engine isn't built with that in mind. But the scope of accessibility in the Modern Warfare 2 open beta is worryingly small.

It does, however, leave a conspicuous gap that other studios can exploit to create a more open FPS in the style of Call of Duty, but one that addresses the accessibility that Activision pointedly ignores. Perhaps Battlefield 2042's disastrous attempt to draw in disgruntled Call of Duty fans may put people off, but speaking to disabled gamers it's clear there's a lot of potential here. 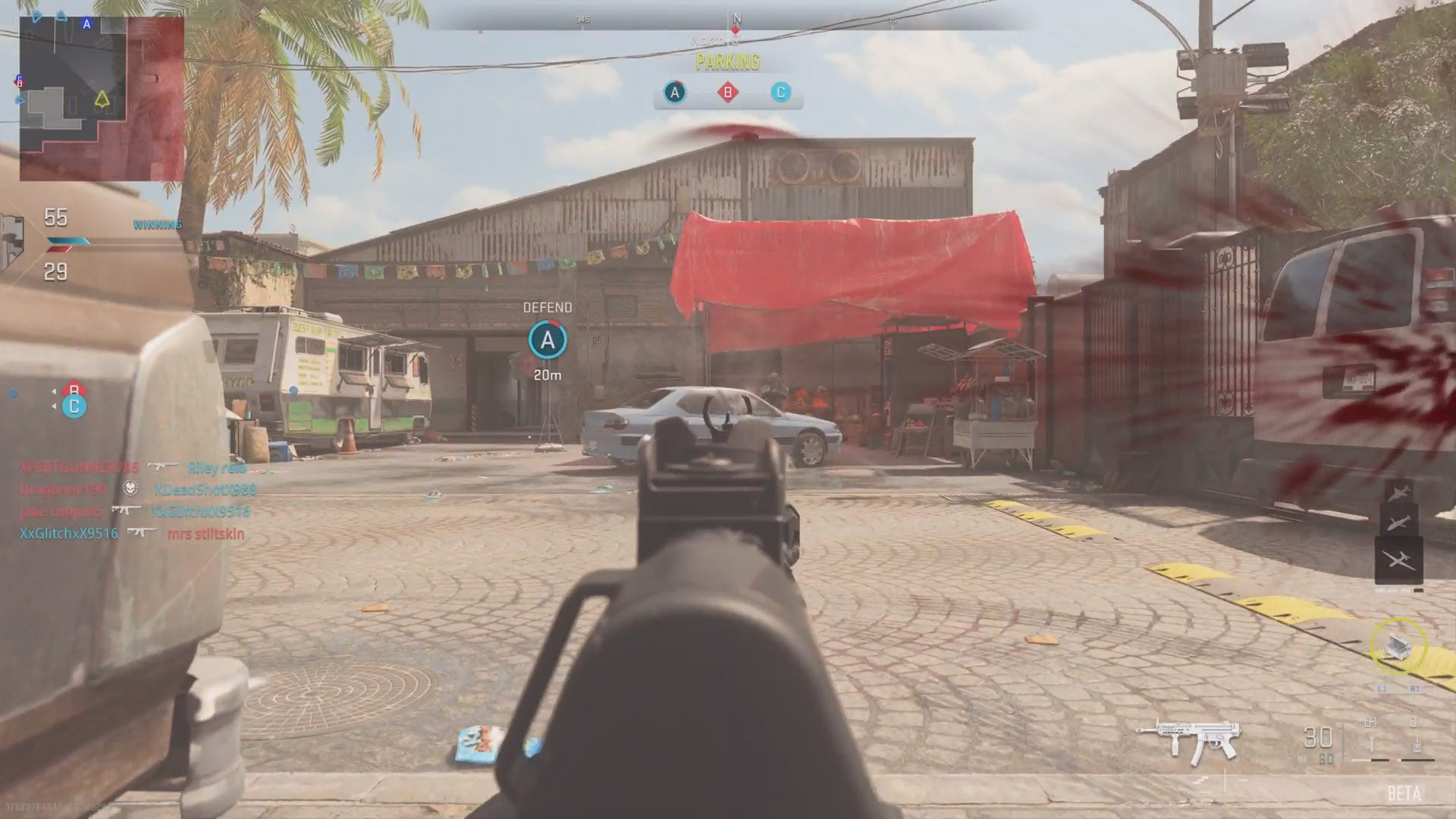 An enemy player almost indistinguishable from the background, despite the camera pointing right at them. Not helping is the layers of effects and filters that further obscure the screen.

An example thrown up in my discussions is Swamp. An audio first-person shooter that showcases how, with the right focus, accessibility - in particular, auditory accessibility - can be deployed even in a competitive FPS environment. Yes, I'm somewhat dubious about some of the accessibility that could be added to Call of Duty's multiplayer, but games like this show that accessible, competitive multiplayer is possible. Beyond that features like slowdown, single-stick modes, many of the accessibility options mentioned above - and more - should be standard in PvE modes in 2022. That they're not is, frankly, unacceptable.

I envy those who can look at Modern Warfare 2's open beta and complain about minimap changes ruining their chances of upsetting inexperienced players. For me, and many others, the open beta was a signal of Activision's continued apathy towards meaningful accessibility.

I'm sure Infinity Ward, despite Activision's apparent apathy towards accessibility, is sincere about appealing to more players. But the open beta suggests an ignorance about who those players are, and a maintenance of the fact that Call of Duty is still not for everyone. Even though it, and all gaming, should be.

We asked Activision's representatives whether the beta's accessibility settings were representative of the final game and have not yet had a response.

Source: https://www.eurogamer.net/modern-warfare-2s-open-beta-demonstrates-activisions-accessibility-negligence
We use cookies to ensure that we give you the best experience on our website. If you continue to use this site we will assume that you are happy with it. Ok