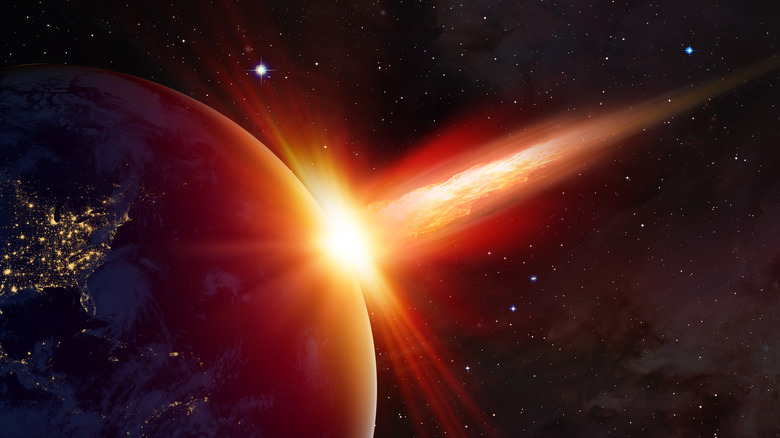 The lunar object that shines in our night sky is a welcome sight and often provides a picturesque addition to the deep blues and blacks that dominate the space between those tiny, distant stars. The Moon can appear as a blood red splotch up in the sky, or as a faint orb that subtly lights up the view overhead.

But what if the Moon suddenly came crashing down to Earth? Would humanity survive the impact? First of all, the Moon could not change its orbital trajectory without a cataclysmic event that, while unlikely, might instead simply destroy it altogether (for instance, a direct impact from an asteroid or other cosmic body with roughly the same mass). But if the Moon suddenly became sentient, in the same way that an unknown substance termed the protomolecule seemingly animates the asteroid Eros in the TV adaptation's first season of "The Expanse," and opted to collide with the Earth, seismic repercussions would reimagine the Earth's surface and composition.

Te Awamutu Space Centre in New Zealand suggests that a collision between these two objects would destroy the Earth, likely shattering into many pieces while destroying life as we know it. Kurzgesagt, on the other hand, estimates that the physical toll of competitive gravity fields would shred the Moon, instead, forming a ring around the planet in the process, while still likely killing off all terrestrial life.

The Moon is responsible for tidal pressure 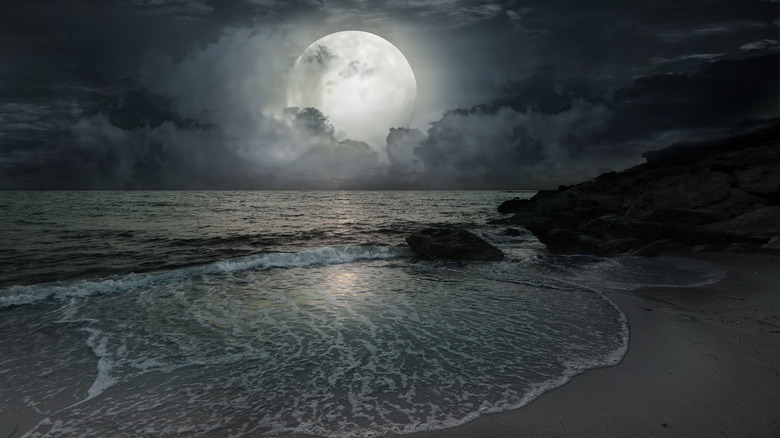 The primary responsibility of the Moon, astronomically and physically speaking, is the maintenance of tidal movement across the Earth. The continuous spiraling pattern that the Moon takes in circumnavigation of our world draws the oceans' waters in a constant undulation that can range from a small change between high and low tides (perhaps less than a meter) to a significant range in the tens or dozens of meters, according to the University of Liverpool's National Tidal and Sea Level Facility.

While the Earth's gravity locks the Moon into a steady orbit, the Moon's competing gravitational pull draws the oceanic and sea waters toward it's own pull, fluctuating back and forth on a total cycle of about 12.5 hours between high tides.

If the Moon were to come crashing toward the Earth, the first change that would be immediately noticeable is the immense alteration of tidal schedules and rise. Kurzgesagt reports that the Moon — if it could come crashing down on Earth — would continue to rotate in orbit, forming ever smaller circuits until it reached the planet. This would result in massive tidal momentum as the Moon continued to draw closer. Eventually, tidal waters would rush onto land in the form of tsunamis hundreds of feet tall before draining back out again in a kind of comedic, cosmic taunting (via Kurzgesagt). All this would leave the land barren as salt water would decimate crops, soil, and aquifers, even during periods of tidal retreat. 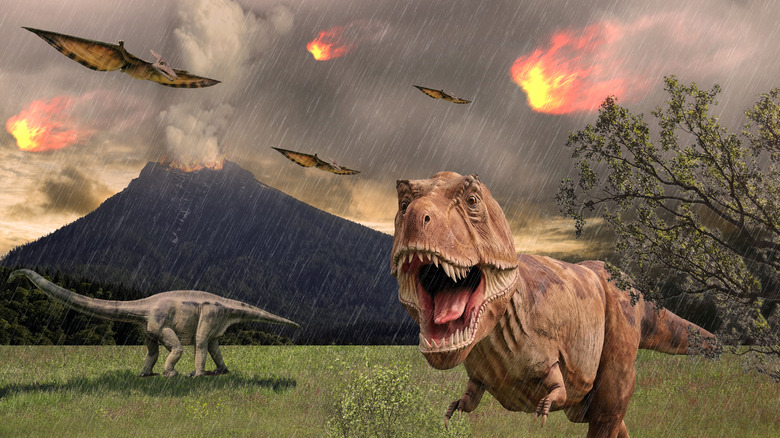 Whether the Moon managed to physically strike the Earth or broke up into smaller components that eventually settled into orbit as a ring, the Earth would ultimately experience conditions similar to those that scientists ascribe to one of the most consequential mass extinction events in the history of the planet. While there are many mass extinctions that are crystallized as fossils (via the American Museum of Natural History), the Cretaceous-Tertiary extinction (the K-T extinction) is by far the most talked about, and, essentially, interesting to researchers.

65 million years ago, something caused the climate of the Earth to shift dramatically, making the landscape inhospitable to the planet's accumulated plant and animal life, according to History. Researchers have explored a number of possibilities, but one that stands out as perhaps the most likely is the impact of a massive asteroid that sent incalculable amounts of debris flying into the atmosphere and out into low-Earth orbit.

This debris cloud blacked out the sun and substantially altered the existing ecosystem's ability to support itself. In addition, volcanic activity appears to have restarted after impact, threatening tertiary life even more.

Impact from the Moon would most certainly create a return to the volcanic Earth of old while blotting out the sky for unending years or even decades. Such a collision would end life as we know it and return the Earth to a primordial state, waiting to begin once more.

Source: https://www.slashgear.com/1019503/heres-what-would-happen-if-the-moon-collided-with-the-earth/
We use cookies to ensure that we give you the best experience on our website. If you continue to use this site we will assume that you are happy with it. Ok