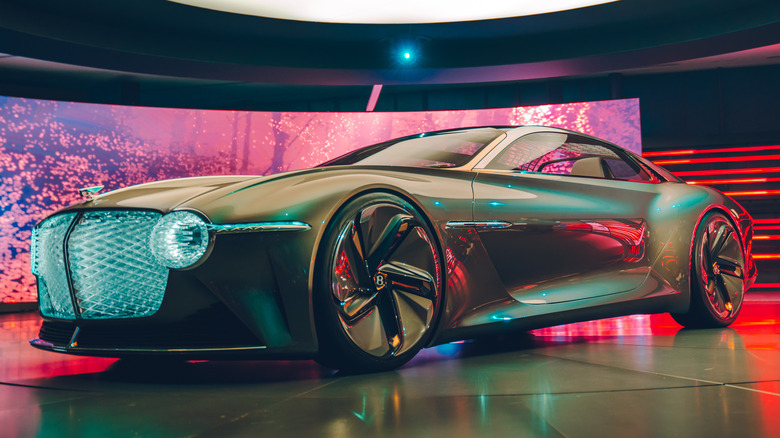 In a recent interview with Automotive News, Bentley's CEO Adrian Hallmark confirmed the inevitable: an electric Bentley was on the way soon. With many other VW Group brands already featuring electric cars in their lineup, it seemed only a matter of time until the Crewe-based manufacturer joined the club. If the recent success of fellow VW stablemate Porsche's Taycan is anything to go by, it seems likely that an EV would have the potential to significantly boost Bentley's sales figures, which are already at record levels. But, the question remains, can they get the formula right on the first try?

Bentley seems to be confident about its prospects, claiming that the car's unique selling point will be its "effortless overtaking," enabled by some acceleration figures that seem almost too good to be true. After a period of flagging sales at the start of the century, the past decade has been very kind to Bentley, which has managed to rejuvenate itself to appeal to a fresh batch of well-heeled clients. This new EV might well be its golden ticket to keep itself ahead of the pack, but there's a lot riding on the as-yet-unnamed car.

Electrifying looks... or not 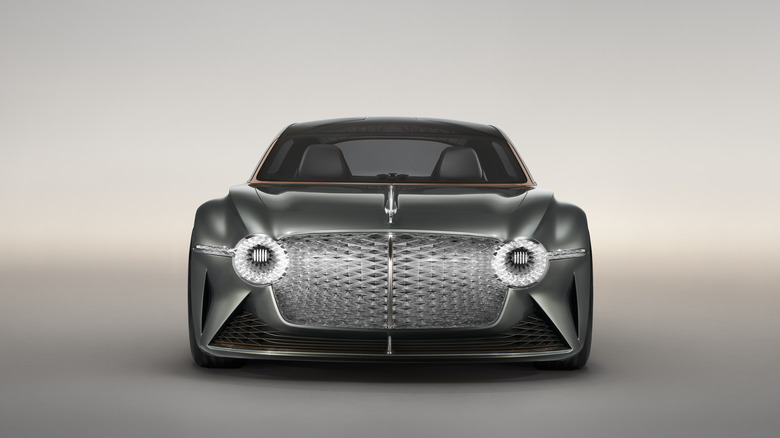 Bentley might have announced that an EV is on the way, but it has remained tight-lipped about what this new model might look like. The only clue that Bentley's CEO Adrian Hallmark has given so far is that Bentley will not "try and make them look like electric cars." This seems like an odd remark given that EVs now come in a bigger variety of shapes and sizes than ever, but perhaps it could be interpreted to mean that Bentley will simply continue the evolution of its current design language rather than try anything too drastic.

It's not even clear what segment the new EV will be competing in yet, as the only confirmation that Hallmark gave was that the car was "not a limousine." Bentley no longer makes a flagship limousine anyway, having discontinued the Mulsanne in 2020. Judging by the brand's sales figures, it seems likely that the EV will arrive in a similar segment to one of their two best-selling models, the Continental GT Coupe and the Bentayga SUV. However, there have been unconfirmed rumors that this new EV will be in a completely new segment for the brand.

Clues from the concept 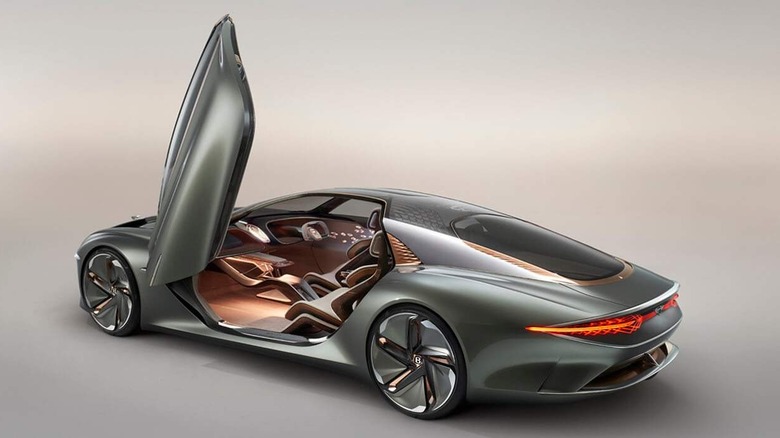 The biggest hint that Bentley has given so far on what the new EV might look like is the EXP 100 GT Concept, which debuted in 2019 and was supposed to preview what the brand's design language could look like by 2035. It still looks reassuringly like a traditional Bentley GT, but longer, sleeker, and with a uniquely designed integrated grille/headlight combo. Although Bentley insisted at the time that this was a vision 16 years into the future, it may very well become the primary inspiration for the new EV that's set to debut in just three years' time. 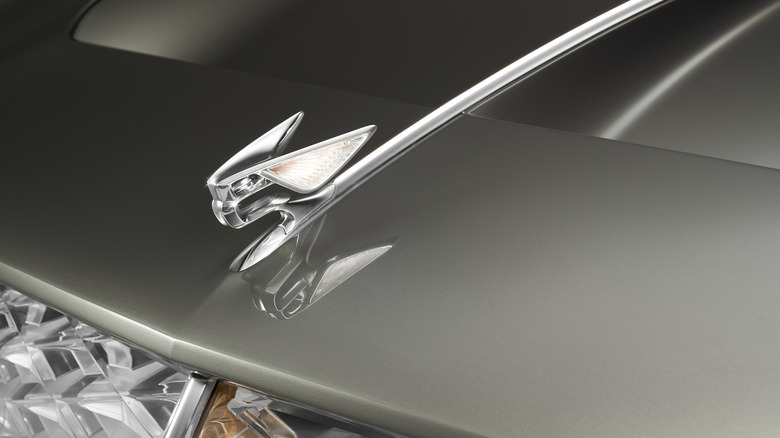 The biggest change between the upcoming electric Bentley and its gas-powered counterparts is its jaw-dropping acceleration figures. Bentley CEO Adrian Hallmark claims that the new EV will do 0-60 mph in just 1.5 seconds, although if that's too fast for drivers, they'll be able to switch the car to a "slower" 2.7 second 0-60 mph mode instead. If this 1.5-second figure is true, it would make this Bentley the fastest accelerating production car on the market. But, despite that, Hallmark says that acceleration will not be the car's main selling point.

Instead, he says it will be the car's "effortless overtaking performance from a huge amount of torque on demand." Bentley's data suggests that clients most enjoy their car's pull from 30-70 mph, so that's where the focus will be. While Hallmark's 1.5-second comment could be taken at face value, it seems quite unlikely that the production car will be quite that fast. For reference, the $2.4 million Rimac Nevera hypercar can go from 0-60 mph in 1.85 seconds, and that's currently the fastest time of any car on the market. Bentley is claiming a faster time from a car that will cost roughly ten times less, come with less horsepower on tap, and presumably be heavier, too. So, the jury's still out on whether the Bentley EV can actually meet Hallmark's ambitious acceleration claims. 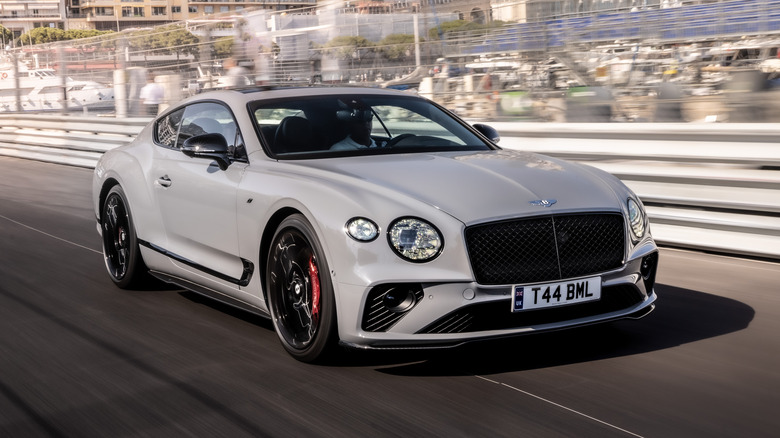 One of the biggest benefits of electrification from a performance standpoint is the potential for much greater horsepower figures than an equivalent gasoline engine could achieve. Bentley is taking full advantage of this, with Hallmark stating that the goal is to double their current top horsepower output with the new car. He gives the example of the Continental GT Speed, which currently makes about 650 horsepower.

So, in top-spec form, buyers can expect the new EV to make around 1,300 horsepower, perhaps more. The problem, Adrian Hallmark says, with increasing power by this much, is that there are diminishing returns in terms of the driving experience. The more power that is crammed into a luxury car, the less likely it is that the driver will ever want to utilize all that power, which makes it essentially redundant. So, it seems after this big leap in horsepower is achieved with the switch to electric power, Bentley won't be in a rush to extract even more juice out of its new powerplant. 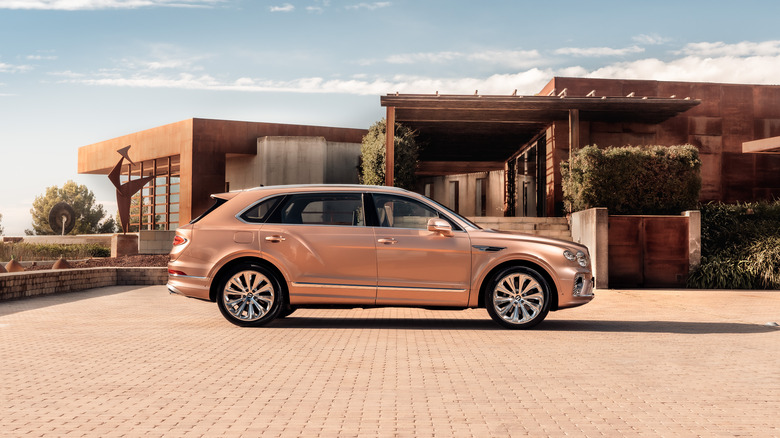 In today's market, EVs are considerably more expensive to buy than their combustion-powered counterparts, with the average EV costing over $20,000 more than the average gas car. Bentley's EV will be far from average, but it'll still be pricey, with Adrian Hallmark revealing that one variant of the new model will cost over €250,000 ($252,000). That's a price point that's roughly equivalent to a top-spec 2023 Bentayga with every optional extra included.

The higher asking price for EVs is primarily caused by their higher cost of production, but a study by BloombergNEF found that, by 2027, BEVs are likely to be cheaper to produce than gasoline-powered cars. This could work in Bentley's favor: Just as electric vehicles start to become cheaper to make, the brand will be launching its first batch of them, while simultaneously charging prices that are befitting of its top gas-powered vehicles. It seems like a recipe for big profit margins, assuming customers are willing to stump up the extra cash.

Based on an Audi platform 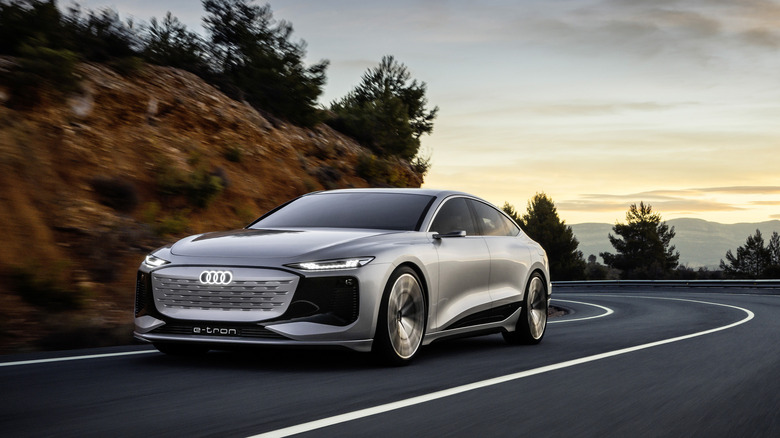 Bentley is borrowing the platform for its electric vehicles from VW stablemate Audi, using the German brand's Premium Performance Electric platform that also underpins the upcoming A6 e-tron. The platform was co-developed with Porsche and Bentley, with Adrian Hallmark keen to stress that Bentley attributes were "baked in from the beginning," rather than added in after the fact. Co-developing the platform enabled Bentley to share the burden of development costs for the parts of an EV that are often the most expensive: the battery, drive units, and many of the internal electrical systems.

While it makes financial sense to share as much of the development as possible, it remains to be seen if this impacts how unique each of the platform's cars feels to drive. Driving a Bentley and a Porsche are at the moment two very different experiences. But, with EV powertrains, in general, offering less individuality and character than combustion engines, Bentley will have to make sure to sufficiently differentiate its cars' dynamics from VW Group's other performance-oriented offerings. 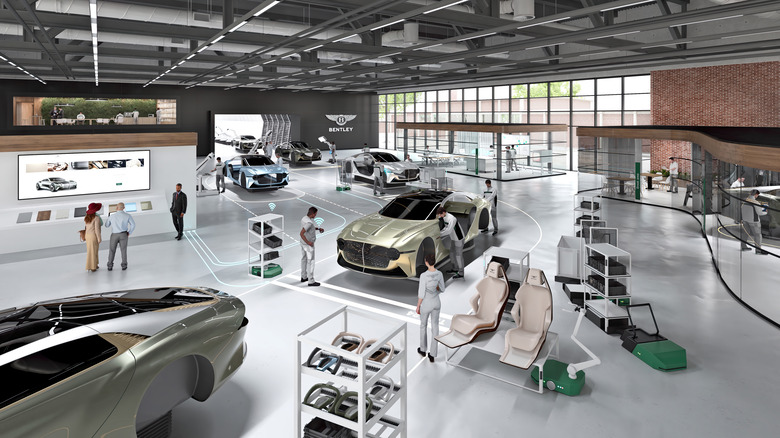 The switch to electrification is just one part of Bentley's overall plan to reduce its carbon emissions, with the Carbon Trust certifying the company as carbon neutral from 2019. In order to meet that standard, Bentley is currently buying emissions credits from other manufacturers and from decarbonizing projects, but to keep its carbon neutral status, it must show that it's making consistent reductions in its footprint year on year.

The arrival of the EV will be a big step towards meeting that goal, although, by itself, it's still not a perfect solution. The Carbon Trust reports that not only has Bentley committed to launching the EV within the next three years, but it's committed to selling only hybrid or BEV vehicles by 2026. That gives the company a window of just a few months between introducing its first-ever battery electric vehicle and removing all purely gas-powered cars from its range. An ambitious timeline, to say the least. By 2030, the Carbon Trust reports, Bentley intends to only sell BEVs. 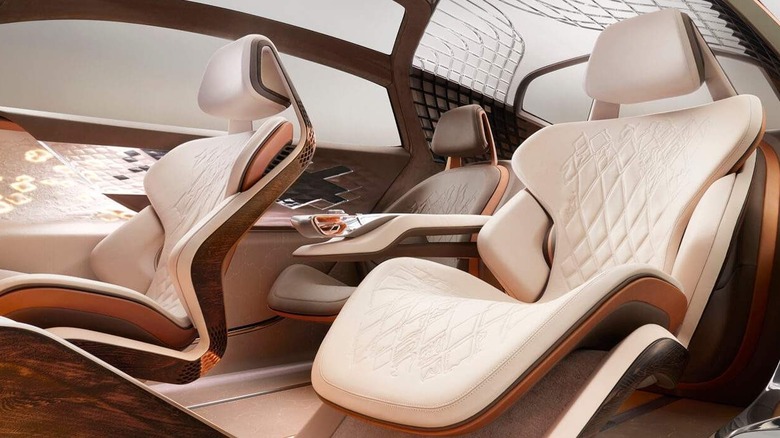 As well as cutting down its emissions from the tailpipe and production process, Bentley is aiming to introduce a wider range of sustainable materials in its cars' interiors over the next few years. The EXP 100 GT Concept previewed what some of these could look like, with sustainably-sourced wool carpets and a leather-like textile upholstery that was made from a byproduct of winemaking. Some of these new materials have been debuted in production vehicles already, but it seems likely that the new EV will bring along a further raft of eco-friendly interior trim.

Wood trim will also still feature in the brand's cars, but like every other Bentley material, it will be sourced sustainably. It might be better for the planet, but Bentley's press release stresses that the new interiors will be no less luxurious than their predecessors. Rather, the focus of the brand is on how to preserve the sense of exclusivity and craftsmanship, while using a new wave of environmentally-friendly materials. 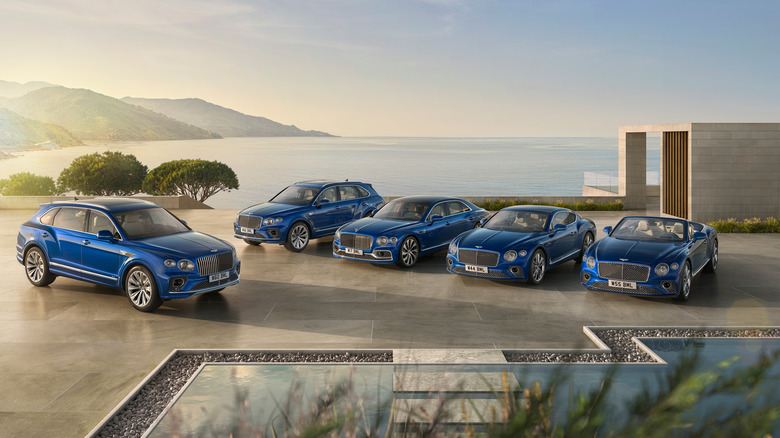 In 2017, it was reported that Bentley was considering a smaller SUV to slot below the Bentayga, with a purely electric powertrain. At the time, Rolf Frech, Bentley's board member for engineering, said that the smaller SUV represented stage two of Bentley's electrification plan, and wouldn't arrive until "2020 and beyond." This new smaller SUV could form part of the company's "five for five" plan, which will see Bentley launch a new electric vehicle every year between 2025 and 2030.

Bentley has confirmed that its four existing models, the Continental GT, Continental GTC, Bentayga, and Flying Spur, will all receive electric replacements. That leaves the door open for the upcoming fifth model to be the smaller SUV that was previously teased, or a larger, more powerful grand tourer to sit above the Continental. However, it seems the secretive project has already been hit by setbacks. As of July 2022, Bentley has confirmed that its program has been delayed, and although its first EV is still set to be revealed in 2025, it won't go on sale until sometime in 2026. CEO Adrian Hallmark stated that the program is behind only by a few months rather than a full year, but still, it's not a great start considering Bentley is aiming to overhaul its entire lineup by the end of the decade. 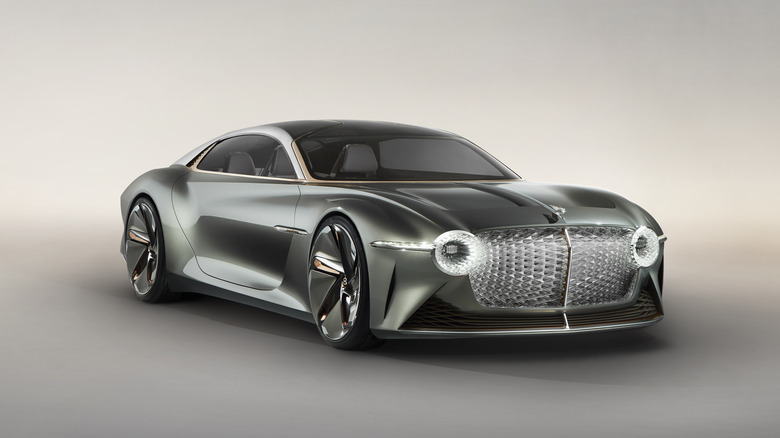 Whichever segment Bentley's new EV is launched into, it will face some tough competition. Its nearest VW rival, the Porsche Taycan, has already proved to be a smash hit, selling more units than the flagship 911 in 2021. The new Taycan Cross Turismo also signals Porsche's intent to branch out into other segments of the EV market. As well as competing with other VW Group brands, Bentley will have to go head-to-head with the swathe of newly-launched EV startups that are clamoring for their share in the market.

Rolls-Royce, too, is looking to make the switch to electrification in the near future. Its first EV, the Spectre, is set to launch in 2023, beating Bentley to the market by several years. The Spectre will be a luxurious two-door grand touring coupe, which sounds awfully similar to the EXP 100 Concept that some reports have suggested will preview the new 2025 Bentley EV. Bentley sits in a unique niche in the market in 2022, with very few brands to directly compete with. But, if it wants to stay ahead, it will have to find a way to differentiate itself from an ever more crowded field of competitors.

Source: https://www.slashgear.com/977453/everything-you-need-to-know-about-bentleys-ev/
We use cookies to ensure that we give you the best experience on our website. If you continue to use this site we will assume that you are happy with it. Ok