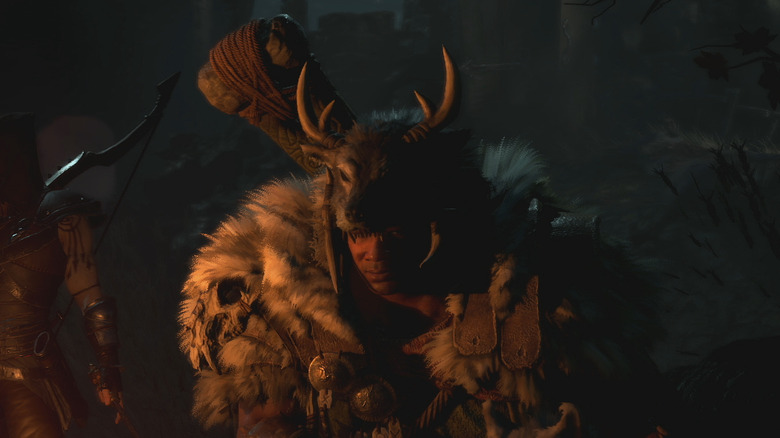 Blizzard's hotly-anticipated "Diablo 4" isn't due until next year, but there is some good news for the franchise's most loyal fans. Blizzard has announced that the public beta for its next outing in the "Diablo" series will start early next year. However, a handful of lucky players will be able to experience a portion of the game via a closed beta testing phase that will kick off within the coming months.

The closed beta phase will be available for PC, Xbox Series S and X, Xbox One, PlayStation 5, and PlayStation 4, complete with cross-play and cross-platform progress save in tow. Notably, Blizzard will bind closed beta testers with a confidentiality clause, which means they won't be able to post details or talk about their experience of playing "Diablo 4" — or, to put it more accurately, the post-campaign Sanctuary experience of the game. Of course, the studio doesn't want to spoil the main story arc revolving around Lilith, the game's big bad and a legendary figure of the "Diablo" lore.

Despite the limited portion available for testing, Blizzard promises a "satisfying" experience for beta testers with plenty of challenges. Players will be able to explore the "Fields of Hatred," "Helltide," "Nightmare Dungeons," "Paragon Boards," and "Whispers of the Dead" chapters, complete with a boss battle at the conclusion of the Closed End Game Beta.

How to get in on the Diablo 4 Beta?

Let's make it clear from the get-go: you need to be lucky and must also have poured hours upon hours of gameplay into the end-game experiences available for "Diablo II: Resurrected," "Diablo III," and "Diablo Immortal." If you think that you have the adequate experience and expertise to be able to offer genuine feedback on how to improve "Diablo 4" during its development phase, you can proceed to the actual registration steps.

First, visit your account dashboard on Battle.net and follow this path: Account Settings / View Account Privacy Communication Communication Preferences. Once there, make sure that the "New and Special Offers from Battle.net" checkbox is ticked before October 11. Assuming you complete these steps, Blizzard will send an invite link to the registered email addresses of the select few players who are accepted into the closed beta testing program.

Apparently, there isn't an easy way to get around this. Blizzard says it will be analyzing gameplay data to select the candidates that it deems fit for an early testing and feedback loop of "Diablo 4." The company will inform the selected beta testers by November 18, and in case you haven't received that "chosen one" email, you can still wait for the phased public beta tests that will commence next year.

Source: https://www.slashgear.com/1017072/blizzard-reveals-secretive-beta-testing-plans-for-diablo-4/
We use cookies to ensure that we give you the best experience on our website. If you continue to use this site we will assume that you are happy with it. Ok